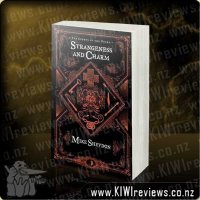 The Courts of the Feyre - 3 - Strangeness and Charm product reviews

Alex has been saved from the fate that awaited her in Bedlam, but in freeing her, Niall has released others of their kind into the population - half-breed fey who have been mistreated, abused and tortured by the institution that was supposed to help them.

Now, as Warder, he must find them and persuade them to swap their new-found liberty for security in the courts - but is the price of sanctuary to swap one cage for another?

Despite absolutely loving Books 1 & 2, I was quite let down by this instalment in the story. I can't quite say exactly whether it was the prolific typos and editing issues, or the tone of "bickering teenagers" the ADULT characters put across that annoyed my more... but whichever it was, both factors contributed to me finding this tale very easy to chew through in very short order, and put aside with great relief.

I really don't enjoy finding myself all bouncy like a kitten at getting a book I have been anticipating for months, and then finding it to be somewhat less than hoped, and far less than it could have been... and all for silly reasons such as those I encountered in this book. The two main adult protagonists - Niall and Blackbird - one a newly-fledged Warder of the courts fresh back from a disastrous mission to save his daughter from hell at Bedlam Institute, the other being one of the oldest "mongrel Fey" - Human/Fey half-breed, the result of a Fey breeding experiment aimed at saving their magical race from extinction - blatting on at each other like hormonally-driven teenagers at war... well, it was frustrating and far less plot-relevant than the author wanted us to believe, IMHO. Yes, they're effectively married, they have a child together, it's a miracle and a blessing... and they fight like Kilkenny Cats at the drop of a hat. Why? Who knows, so really, who cares!

So... what IS the plot of this book? Nothing short of the end of the world at the hands of over-powered, mentally-abused magically-enhanced children... what else?! How close to armageddon do we get? The very, very brink of course. Was this brought to bear in a tension-filled plot climax? Nope. Rather, a lot of foul weather, a few ranting lunatics thrown in on both sides of the cast, some pretty lame plot devices... and almost all of it was highly predictable.

After "Sixty-One Nails" I was expecting a lot from Mike Shevdon... he came through in Book 2 - "Road to Bedlam" but in this one... alas, he has flopped badly for me. If there is a fourth book in the series, and I suspect there might well be, I sincerely hope he takes the time to sharpen it up to something so crisp and cutting that you should read it with leather gloves and safety glasses on!

Great new adventure series from worldwide bestselling creator of Captain Underpants. George and Harold have created a new hero who digs into deception, claws after crooks, and rolls over robbers. When Greg the police dog and his cop companion are injured on the job, a life saving surgery changes the course of history, and Dog Man is born. With the head of a dog and the body of a human, this heroic hound has a real nose for justice. But can he resist the call of the wild to answer the call of duty?