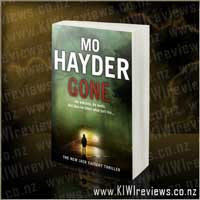 Disclosure StatementFULL DISCLOSURE: A number of units of this product have, at some time, been supplied to KIWIreviews by Penguin Random House or their agents for the purposes of unbiased, independent reviews. No fee was accepted by KIWIreviews or the reviewers themselves - these are genuine, unpaid consumer reviews.
Available:
March 2010

Before long the jacker himself starts to communicate directly with the police, and Caffrey knows this wasn't a one-off. He will strike again - another car with another child on the back seat. Even scarier still is the fact that the jacker seems to be one step ahead of the police, no matter how quickly they pursue him.

In a race against time, Caffrey must track and find his criminal, before more innocent victims become another notch on the dashboard...

Wolves of the Beyond - Star Wolf
Rating: 7.8

This is the fifth book in Mo Hayder's 'Jack Caffrey' thriller series. I have not read any other books in this series and found that 'Gone' worked well as a standalone story. It is a fast-flowing and compelling read, although somewhat disturbing.

Those who find it thrilling to vicariously brush close to the dark side of human behaviour and the twisted psyche will not be disappointed by 'Gone'. The characters are believable; you definitely care about the two main protagonists, Jack Caffrey (Detective Inspector) and Flea Marley (Underwater Search Unit). You can readily feel the anxiety and reactions of the different individuals whose lives are thrown into turmoil by the actions of a very 'sick' and yet very clever 'jacker' - who specifically car-jacks particular vehicles - ones with a female child inside. This jacker has an uncanny ability to keep one step ahead of the police - has Caffrey met his match?

I seldom read the crime/thriller genre, because when these stories are well written with a realistic premise and good character development, I can get flung right out of the story - ignited with anger toward the perpetrators of just such crimes in society, or reeling from a blow to my confidence in humanity. Though doubtless this is evidence of skilful writing, I find it hardly edifying or entertaining and it can take some time to purge and recharge with a lighter point of view. For this reason it is hard for me to recommend Gone as 'good' reading. However, avid readers of crime thrillers will likely find it a ripping read.