Wolves of the Beyond - Lone Wolf review 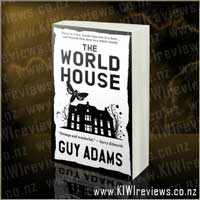 Disclosure StatementFULL DISCLOSURE: A number of units of this product have, at some time, been supplied to KIWIreviews by HarperCollins or their agents for the purposes of unbiased, independent reviews. No fee was accepted by KIWIreviews or the reviewers themselves - these are genuine, unpaid consumer reviews.
Available:
February 2010

There is a box. Inside that box is a door. Beyond that door is a house. In some rooms forests grow. In some, prisoners wait. At the top of the house, a prisoner sits behind a locked door waiting for a key to turn. The day that happens, the world will end!

An unusual story that reminded me, ever so slightly of Jumanji. Though nowhere near as tame, The World House follows a wide cast of characters who have been sucked into the house by opening what one might consider a distorted version of Pandora's Box. It all seems to be happening for a reason, but throughout the story, it is difficult to divine just what that reason might be... and then when all the threads come together at the end, well... this book is a horror/thriller for a reason.

Plenty of gore and sudden death, especially near the end, which is to be expected of the genre. Slightly less expected is the wide variety of 'monsters' from brooms in the broom cupboard to sharp toothed cherubs and cannibalistic natives.

My favourite character by far was the autistic girl, Sophie. Her perspective was wonderfully distorted and yet seemed to make more sense than anything else. The main character, Alan's desperate attempts to protect her innocence were, for me, what drove this story.

Only one real downside was that I noticed in several places that the book had not been properly edited and it made the flow a bit jarring. Especially when whole letters were missing and you got "I is" as opposed to "It is". Something the publishers should definitely be looking out for.

All in all though, a great book for those of you out there who like horrors with a decent plot and a decent sized twist at the end!

Ryan has disappeared, and Cal's suspicions are raised when he receives a cryptic message: 90 days.

Cal agrees to work as an undercover agent for SI-6 to discover the whereabouts of his twin. But at an island getaway for troubled teens, Cal quickly discovers things are not as they seem. With secret hideouts, underground training camps, dangerous clues and treacherous terrain, Cal has to his his most heart-stopping challenges yet. Will he find Ryan? Or will his first secret mission be deadly?

The clock is ticking, any second could be his last.