« A User's Guide to the Universe review 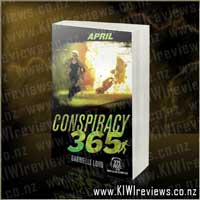 A high-speed chase gone wrong leaves Cal exposed to Oriana's thugs. If captured, all hope of solving the Ormond Singularity and having a normal life again disappears. He has to get away, but how can he leave an innocent man to drown?

If Cal survives, he must decipher the Ormond Riddle and risk emerging from hiding, to stop his little sister's life support from being switched off. Even if Cal makes it to December 31st alive, will his family ever be the same again?

The clock is ticking. Any second could be his last. He has 275 days left.

Like the other reviewers I consider this to be the best book in the series so far as well. This book marks the 1/3 way point and so it seems that the author has decided to amp things up a bit, which makes for an even more rollicking read.

As with the other books in the series, this is extremely well written and the pace of it is just right with it making you not wanting to put it down as you just have to know what happens next.

I have long been a fan of episodic book series ever since I first read The Belgariad by David Eddings, and this series is right up there with its writing style and ability to captivate the reader. Now whilst this series is squarely aimed at the younger reader, I must admit i'm getting a wee bit hooked on it as well and I can't wait to see what happens next.

This book is packed with non stop action, and you can read it in one breath.
It was written for young adults, and I'm sure I would have enjoyed it much more if I read it when I was one.
My main disappointment was that there was no female heroine, just female villains and shady characters, although this might change until the end of the series.
And last warning, don't attempt to read this out of order. Each book is relying on its predecessor and does not stand by itself.

The Conspiracy 365 series has gone through January, February and March, but now it is time to go to the 4th level of the 365 day long conspiracy. After reading this book I must say that I thought the artwork was awesome, although when I saw the image of the Ormand Riddle it had me rather confused as it was quite difficult to decipher.
After reading the previous books I'm actually beginning enjoy Callum's survival skills, his "outside-the-box" thinking, and the way he has so far survived everything that stood in his way. It appears that the series is getting more and more intense and the pictures are appearing more often, and to me more action means better reading. In this book, the part that worried me the most was when Callum's 9-year-old sister's life support, which was supposed to wake her up from her dreadful coma, was going to be switched off, in fact my heart rate went up just by reading it.
The best part of April when Callum thought that he had discovered the person who had made him a hunted fugitive, a boy who looked exactly like Cal used to be before the conspiracy began. There was also something else that I'm enjoying, I think that the flow of colours that are appearing on the book covers is fascinating, so I can't wait to see the colour of book 5. When I had finished reading the book I thought it ended all to quickly, not only that, it ended just as it was getting intensely exciting. I found the ending situation different from the previous ones because it seemed to be even more difficult to get out of, and so I have no idea how Callum is going to get out of trouble in the next book.
So far this book series is something that I am loving, so here's hoping you love it to.

Definitely the best in the series so far, April brings Cal Ormond into the wilderness and back. His willingness to risk it all for the chance to save his sister's life is something I really admire about his character.

The pieces of the puzzle grow in number in this instalment, but they still make very little sense. I enjoyed some of the new characters who are sure to reappear in later books, especially the adorable old lady who owned a dog called 'Timmy' (Famous Five anyone?).

Suitable for most ages over about 10, this is an exciting serial that grows in complexity with every instalment. I like the cliff hanger ending of this particular book, because it is not quite so melodramatic and infinitely more terrifying. How Cal will get out of this one, I cannot begin to guess. Can't wait for the May installment!

An excellent fourth instalment, this one was a lot more 'realistic' for me, reading it from an 'older than the target market' perspective. As with all previous titles, this picks up where the March title left off, and continues to follow Cal Ormond in a diary style, with locations, times and dates noted at the start of each 'significant event' that occurs.

In this book, we get to join Cal as he discovers a number of new secrets, many of which are still not fully explained by the end of the book. Cal makes some new allies, (who actually don't get injured this time around!) and meets up with a couple of his current trusted 'friends' again, including a brief but significant appearance by Winter Frey, and the mysterious "Cal's Anonymous Twin".

The ending is a far more believable cliffhanger, though it lacks some of the edge of the previous endings, since it's a non-lethal one this time, but possibly far more difficult because of that... The May title will be one to wait for, for sure, since I have no idea how on earth Cal is going to get free from this trap, especially considering one very important revelation imparted to him in this book.

Overall, for me, this is probably the best of the series so far, and it has me hanging out to read the May release. With books like this, I can usually predict the next few steps, but I find myself utterly stumped as to how Cal will proceed from here. Thrilling.

A great series for the kids in the target age range, and still good 'casual' reading for those above the range too, even the parents.

It was just another after-work happy-hour bar down town, where business professionals unwound with a few drinks . . .until something went terribly wrong. And after twelve minutes of chaos and violence, eighty people lay dead.