ProdID: 1818 - The Kira Chronicles #2 - The Song of the Silvercades
Written by K.S. Nikakis 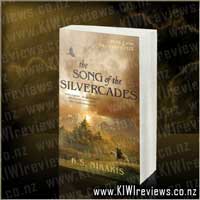 Disclosure StatementFULL DISCLOSURE: A number of units of this product have, at some time, been supplied to KIWIreviews by Allen & Unwin or their agents for the purposes of unbiased, independent reviews. No fee was accepted by KIWIreviews or the reviewers themselves - these are genuine, unpaid consumer reviews.
Available:
July 2008

The Kira Chronicles #2 - The Song of the Silvercades product reviews

Deep in the southern forests, the Tremen are being viciously attacked by their neighbours, the Shargh. As the death toll mounts, gold-eyed Kira, the Tremen's most gifted Healer, flees north to see help from their long-lost warrior kin, the Terak.

Her perilous journey barely begun, Kira is forced to compromise her beliefs to rescue Caledon, a man driven by his faith in divine order and star patterns. In turn, his knowledge allows her to survive the perils of crossing the treacherous Azurcades. Kira soon realises that he sees her as part of a celestial plan, and begins to mistrust his intentions.

But not even Caledon can foresee what will happen when she meets the one man with the power to destroy all she has striven for. As the Shargh's most ancient prophecy comes to life, 'gold meets gold', and Kira - and the Tremen - will never be the same again.

Two young companions, Totho and Salma, arrive at Tark to spy on the menacing Wasp army, but are there mistakenly apprehended as enemy agents. By the time they are freed, the city is already under siege. Over in the imperial capital the young emperor, Alvdan, is becoming captivated by a remarkable slave, the vampiric Uctebri, who claims he knows of magic that can grant eternal life. In Collegium, meanwhile, Stenwold is still trying to persuade ... more...