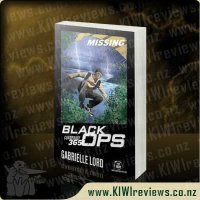 Ryan has disappeared, and Cal's suspicions are raised when he receives a cryptic message: 90 days.

Cal agrees to work as an undercover agent for SI-6 to discover the whereabouts of his twin. But at an island getaway for troubled teens, Cal quickly discovers things are not as they seem. With secret hideouts, underground training camps, dangerous clues and treacherous terrain, Cal has to his his most heart-stopping challenges yet. Will he find Ryan? Or will his first secret mission be deadly?

The clock is ticking, any second could be his last.

Okay, I admit I was never a real big fan of the original series, but this new book is off the chain! I love the 3D lenticular design, it makes it look as if Callum Ormond is about to jump out of the cover at any moment! I liked the sound of the resort on Shadow Island that is the place where most of the story is set; if such a place existed, minus the whole evil side of it, then I would sign myself up A.S.A.P. I also found the characters quite cool, the bad guys were, as expected, my least favourite, but there were no individual characters that stood out at either end.

The storyline went well, it was enjoyable and smooth, I actually want to go back and read it again, sometime very soon. I managed to get one of the two books that came out between the end of series one and this new trilogy, but not the other one, so the only hiccup in the story was at the beginning, so I will have to track down the other book and pick things up from there. Other than this fact, my overall feeling towards this story is "holy fudge this thing is awesome!" I am anxiously awaiting book 2, of this trilogy, and I will be more than happy to read this book again.

I do not yet know the price of this book, but judging on the prices of the previous conspiracy 365 books I would say that it is around $17.00 or $18.00, and if this is the case than the price is very good, right in the Goldilocks zone! I lost track of time just a little bit, about enough to deserve a 5/10, but that's it. Over all, I think that this product deserves a full thumbs-up (

On a cold Christchurch morning, while the city was sleeping,
before the birds roused him with twitters and cheeping,
curled up on the end of his friend Emma's bed,
Tiger woke with a start... and a feeling of dread.

Written in response to the Canturbury Earthquake of 2010, Quaky Cat is an evocative, uplifting story that will touch the hearts of all who read it.