ProdID: 172 - The Second Sons : 3 : Lord of the Shadows
Written by Jennifer Fallon 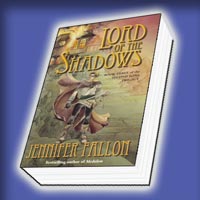 Disclosure StatementFULL DISCLOSURE: A number of units of this product have, at some time, been supplied to KIWIreviews by HarperCollins or their agents for the purposes of unbiased, independent reviews. No fee was accepted by KIWIreviews or the reviewers themselves - these are genuine, unpaid consumer reviews.
Available:
November 2003

The Second Sons : 3 : Lord of the Shadows product reviews

"There is nothing noble in what you've done, Dirk. You simply set out to get even with Belagren and Antonov, and decided to bring the whole world along for the ride."

Marked as a traitor by his own people and distrusted by his new allies, Dirk Provin walks a dangerous tightrope as he tries to find a way to expose the truth about the second sun. Will the darkness finally consume Ranadon? Or will his by now countless enemies consume him?

In Dhevyn, Alenor remains angry over Kirsh's continuing affair with Marquel, and embarks on a course of action that could cause the deaths of those she needs most. Walking the path of moderation may not be the most astute move she has made.

And in the Baenlands, Tia Veran is convinced Dirk has betrayed them, and sets out to do something about it...

With authors like this on the market, I am shocked that I have overlooked the Fantasy genre as a source of mental exercise. There is a wealth of talent out there, writing some astounding stories, weaving alterante worlds out of wishes and dreams, science and magic. Jennifer Fallon is amongst these new oracles.

The characters are well developed and have a well-founded history from the previous 2 volumes (which I am simply DYING to find copies of and read) and it shows in this, the climax of the trilogy. Though this book can be read as a stand-alone, it draws on a knowledge of 'the past' provided by the previous volumes. However, it is so well covered throughout, at key points of retrospection and conspiratorial dialog, that the story suffers only slightly for lack of reading them.

I found myself taking every opportunity to stick my nose back between the pages and absorb a few more moments of a history that never happened, but seems as real to me as any other book I have read, non-fiction included. She's good, darned good!

The thing that most drew me to this story was the lack of any overt fantasy really. No magic, no hyper-advanced technology made commonplace, no strange aliens... just people, being people. Devious, selfish, thoughtful, insightful, powerful and powerless, the high-born and the low-born, the luxurious rich and the hard-working poor... a powerful reflection of today's world as seen through a far distant mirror.

Overall, another great read. I sincerely hope to have the chance to read other volumes in this series. It would be good to add them to this list.

Jake is excited to be staying at the famous Floating Hotel of Venus, until his cyborg friend Henry sniffs out more than just garbage