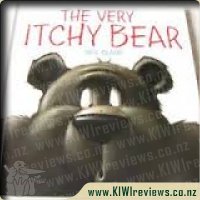 This is flea
about to bite,
but not because he's impolite.

In The Very Cranky Bear, Bear's cave was invaded by four playful animals. In The Very Itchy Bear there is just one creature bothering him: a very persistent flea. Bear tries to get away, but Flea just won't leave him alone.

When Bear finally gets rid of Flea, he finds that he misses him - and a new friendship is born.

We have quite a few of the stories based around 'Bear' as my daughter received a box pack for Christmas a couple of years ago now which included the story of 'The Very Itchy Bear' as well as a few others, though I have to say that this one has to be my favourite of them all, and also of Miss 3 and it is one of those stories that we can read over again and again and never get sick of.

This book is just delightful and has the most gorgeous pictures, with beautiful pictures and bright colours used throughout, and bear is such a good size comparison compared to Flea, which made for a bit of a game of I-Spy for Miss 3 who had to look quite hard a the pictures to find the teeny tiny Flea on each of the pages, which she just loved to do.

I love the way in which the story is written, especially the rhyming bit about Bear and Flea, this is very catchy and I often hear Miss 3 sitting down by herself with this book and reciting this part of the book as she retells the story to herself. It is a very playful book with a lovely rhyme to it, making it fun for young children to listen to. I love the message it gives to children of giving people a chance, though you might think you don't like someone at first, if you just take time to get to know them you may change your mind and actually become very good friends. Just like in the story with how Flea was annoying Bear, but when he finally went away and left bear alone, Bear realised he missed Flea, luckily they were reunited and became the very best of friends, so a very happy ending.

This book is definitely worth adding to your collection, especially if you already own the other 2 books about Bear 'The Very Hungry Bear' and 'The Very Cranky Bear'. It comes at an amazing low price, which is a bonus for such a quality children's book.

I have just been introduced to the story The Very Itchy Bear and I must say I am in love. I work with kids and we have read it several times a day for the last couple of weeks and I'm still not sick of it. Which to me is always a sign of a good book.

It's an easy read and the kids have quickly learnt the words and will read along or jump ahead telling me what is going to happen next. The rhyme about Flea biting bear and bear getting annoyed is very catch. I will admit to finding myself reciting it even when not at work! I love how the story ends with an unlikely friendship between bear and flea.

The book is worth checking out and is a hit with children of all ages. I also recommend checking out the other bear stories as well The very Cranky bear and The Very Hungry Bear.

When I seen this amongst the Scholastic June releases I held out hope that it would come up for review because I just had to have this book. When it didn't come up I rushed out straight away and bought a copy from my local Paper Plus and when I found out it was only $13.50 for the boardbook I was so stoked what a great price for a great book and even better that it is a board book so my son can look at it all by himself without damaging the pages.

The story is so delightful with the gorgeous ryhme about the little flea biting the bear and the bear getting annoyed. But when the Bear gets rid of the flea he feels all alone. With his friend soon by his side once more the pair do everything together. Such an unlikely friendship but such a sweet story. You find yourself so glad that they get reunited.

I don't know who loves the book more me or my little boy but we have read it lots and lots of times, even though we have only had it a few short days I could practically recite the book from start to end already because it is that real memorable style of rhyme that gets quite stuck in your mind absolutely LOVE IT!

Score: 9.8
Product reviews for listing 962: The Smell of the Moon -  Written by Lemanatele M. Kneubuhl

This book isn't Lord of the Rings, but it is a quest; it's not Roots, but it is a story about the difficult and joyous search for your origins; and it's not Gilligan's Island, but it is set on an island paradise. The Smell of the Moon celebrates a return to humanity, to family and community, to a place where your senses can live large ... where you can smell the moon!