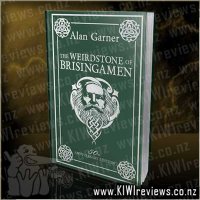 This lavish hardback edition of The Weirdstone of Brisingamen is published to commemorate the 50th anniversary of Alan Garner's seminal fantasy masterpiece. Featuring a beautiful new design, and a foreword by Alan himself, it is a must-have collector's item for any lover of great children's fiction.

When Colin and Susan are pursued by eerie creatures across Alderley Edge, they are saved by the Wizard. He takes them into the caves of Fundindelve, where he watches over the enchanted sleep of one hundred and forty knights. But the heart of the magic that binds them - Firefrost, also known as the Weirdstone of Brisingamen - has been lost.

The Wizard has been searching for the stone for more than 100 years, but the forces of evil are closing in, determined to possess and destroy its special power. Colin and Susan realise at last that they are the key to the Weirdstone's return.

But how can two children defeat the Morrigan and her deadly brood?

Now, you have to keep in mind that the original story was written 50 years ago... the story is very 'old-school' in all regards, dealing with ancient mythos, in older language, and using some names that are only familiar to classic fantasy readers or Nordic cultural experts. Fear not, the main character is quite easy to recognise, even with the somewhat different setting.

What is utterly different for us colonials is the actual geography the story is set in... it's a section of the British Isles just south of Manchester... and it's all real. Unlike every other 'old English myth' fantasy tale I have read or researched, this one is based in a real section of land, where many of the landmarks still stand today.

The story itself was quite enthralling, but had one vital flaw... the ending... it simply wasn't there! OK, maybe that's not accurate, the story does have an ending, but it was so 'open' it felt as though the printers had simply 'lost' the last chapter. The final line of the book is "And here is an end of it." I put this forward... a rope has two ends, one that you consider the start, and the other the finish. This book may indeed be "an end" of this tale, but I find myself wondering just which end it is...

Overall, I think the most striking point about this book has to be the cover illustration, done in embossed silver on a mid-green base... it's very striking and distinguishes this book from all others on the shelves... but what does it say about the story that the packaging is the most significant point about it? NOTHING. The story stands well, and will appeal to anyone who has an interest in reading classic fantasy written in older style language, with all the romance and lyricism you would expect. A real treat by any other name...

Sammy Baker is a quiet kid who wishes he wasn't so shy and timid. He is frightened but eager to prove he can be brave. On Halloween night, he follows his friend to the Marple House, an abandoned mansion on the other side of town.

Just past midnight, he feels a cold tingle at the back of his neck. The chill spreads across his body. It's unlike anything he's ever felt before. Soon, his whole head feels like a block ... more...