Mark of the Thief review 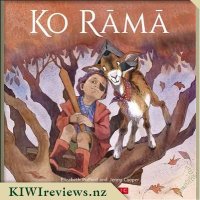 Moving with his dad to live on Grandma's farm turns out to be great fun for Danny. He makes friends with a wee goat - also motherless, just like Danny - and they have many adventures together. Then Dad marries again, and they move to the city ... will Danny ever see Rasmas again?

Working in early childhood we interweave Te reo throughout our entire day. When it comes to book I'm so excited with home many are being published lately in both English and Te reo options. Given the choice I tend to go for the Te reo each time as it's wonderful to be able to expose the children to more language.

Ko Rama is the most delightful book from the moment you pick it up the illustrations capture your attention. Jenny Cooper does a wonderful job of capturing all the emotions from the story in her pictures. Before reading the book I looked through it with a few children and we had a lot of discussion about all the different pictures and what they thought was happening.

Elizabeth Pulford has written the most wonderful story about a young boy who is being raised by his dad and his grandmother, he finds friendship in the form of a goat who has also lost his mother. The story follows their friendship and the saddens he feels when he moves to the city having to leave his goat behind.

After reading through the story in Te Reo I translated what was happening for the children and I found it promoted a lot of conversation with the group of 4 year olds I read it with. There were conversations about where his mother may of been, had she died or did she live in another house? There was also discussions about why they had to move after his dad got married and why the goat couldn't live in the city. This book was just so delightful to share, I have just gone and brought the English version of it as well to share with my niece and nephew.

This book is beautifully illustrated; it would delight any child lucky enough to own it. For me, the plus is that it is published simultaneously in English and in Te Reo, so the adult buying it for their chosen little one can decide which version to select. I reviewed the Maori version, but I had a quick glance at the English edition first, and the layout and illustrations are identical. The only difference is that the Maori language version includes a one page glossary at the back which would be useful for those who are a bit rusty.

The story is about a little boy who moves to live on a farm with his grandmother. Here, he finds a new friend - a bouncy goat called Rama. The book cover features one of the cutest illustrations I have ever seen, and that alone would have been more than enough to whet my curiosity about the contents. Rani and Rama are shown perched in a tree dressed as pirates; Rani has a wooden sword, eye patch and sea boots (his farm gumboots!) and Rama has a spotted scarf and a three-cornered hat.

When Rani first meets Rama, his grandmother explains that he looks wild and needs Rani to look after him. Rani asks why he needs someone to look after him, and that gives his grandmother the opportunity to explain that he has lost his mother too. It is a lovely, low-key way to introduce the idea of losing someone close to you. The boy and the goat check each other out, and quickly become good friends. A pet can often help a child to cope with challenging events in his or her life, and this is exactly what happens here.

The two little boys I shared this story with loved it. They are bilingual in English and Maori, and, although quality texts in Te Reo are steadily becoming more available, they were especially enthusiastic about this one. When I arrived with it and showed it to them, they became very excited. Mr Nearly Three jumped on to my knee, and Mr Four, who is a little more reserved, sat beside me on the sofa. I read the book aloud to them and they were enjoying it until we got to the part where boy and goat might have to be separated. They were not happy about that part at all!

When we had reached the last page, I asked them what they had thought of it. Mr Nearly Three said he wanted to take the book away and look at the pictures again while Mr Four was more interested in finding out how he too could get a pet goat! This generated a long discussion about how it is important to have an animal friend that you can play with and with whom you can share all your secrets and problems. The discussion was lost on Mr Nearly Three, however; he was far too busy checking out the pictures!

The bestselling guide to markets in all areas of the media, completely revised and updated, and this year in its 100th EDITION, with a foreword by Ian Rankin.

New articles in this edition include:

• Notes from a successful writer of historical fiction - Bernard ... more...