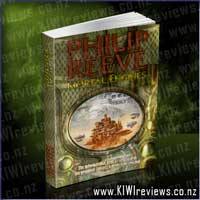 Disclosure StatementFULL DISCLOSURE: A number of units of this product have, at some time, been supplied to KIWIreviews by Scholastic (NZ) or their agents for the purposes of unbiased, independent reviews. No fee was accepted by KIWIreviews or the reviewers themselves - these are genuine, unpaid consumer reviews.
Available:
May 2009

The great Traction City lumbers after a small town, eager to strip its prey of all assets and move on. Resources on the Great Hunting Ground that once was Europe are so limited that mobile cities must consume one another to survive, a practice known as Municipal Darwinism.

Tom, an apprentice in the Guild of Historians, saves his hero, Head Historian Thaddeus Valentine, from a murder attempt by the mysterious Hester Shaw - only to find himself thrown from the city and stranded with Hester in the Out Country. As they struggle to follow the tracks of the city, the sinister plans of London's leaders begin to unfold ...

When I started reading this book I realized that I had actually read it before. At the time I had thought it a bit weird and strongly disliked the ending. This time round I enjoyed it a lot more, perhap because I knew it was going somewhere (there were more books with the main characters to come).

The world Reeve has created is amazingly detailed and consistent. I love the way his characters are completely at ease within their moving cities and actually fear dry land (as is the case for Tom).

Though obviously targeted at young adults, this book is not childish. Many of the themes are in fact quite disturbing - What would the world be like in the centuries after a nuclear war? Many authors have wrestled with this question, but none so imaginatively as Philip Reeve.

One thing I especially love about this book is that the heroine is so unconventional. I cannot think of any other fantasy books I have read where the young teenage heroine is explicitly ugly (a scar runs down her face and wipes out one eye), often grumpy and selfish, and yet somehow surprisingly adorable. Even better is that Reeve allows both young characters to save each other in equal measure.

I would probably recommend this story to children ten and older (as an arbitrary guess) - if you don't think your child is ready for a book in which people die and whole cities are incinerated then this is probably not for you.

All in all, a good beginning to what is shaping up to be a very interesting series.

The first of the Mortal Engines tales published, though there is a plot-prequel, Fever Crumb that explains the origins of Municipal Darwinism.

In this tale we are introduced to the main characters who, it appears, will be the ones we follow throughout the series: Tom Natsworthy, lowly third-class Apprentice Historian who just happens to be in the wrong place at the wrong time, and hears something he shouldn't have. He worships someone who isn't at all what he appears, and who betrays him, thus starting the chain of events that will lead to a cataclysm like none other, and Hester Shaw, badly-disfigured young woman hell-bent on revenge for the murder of her parents.

Throught this installment, we see Tom and Hester face all manner of obstacles, and through teamwork and sheer determination overcome them and continue their quests, both leading to London - Tom to return home, and Hester to kill her parents' murderer. Along the way, Tom and Hester start to see another way of life for themselves... one in which they are no longer enemies, but allies and partners. This comes as a profound shock to them both, since they could hardly be from more different worlds. Tom has lived his entire life on the moving London traction city, and Hester who has spent all her life on the solid unmoving ground. Then they discover the world of the Bird Roads, travelled by the aeronauts in their ballooncraft and dirigibles.

Overall, this is a great start to the tales, and I am already looking forward to diving into Book 2 - Predator's Gold. The characters are extremely well presented and detailed, having a depth that is revealed as the story progresses. They are based in a well thought-out universe that is internally consistent, and scarily an all-too-plausible aftermath of humanity's self-destructive nature. I am only glad that I don't live in that world... the though of watching a giant mobile city bearing down on me with it's suburb-sized jaws clamping away at my heels just does *not* appeal at all!

Score: 10.0
Product reviews for listing 8813: This is Where I Stand -  Written by Philippa Werry

I am in the wind and the rain and the sun.

I am in the birdsong and the green leaves and the moonlight.

I am in the hearts of those who stop and linger.

THIS IS WHERE I STAND.

A beautiful story centred around the statue of a WW1 soldier - which could ... more...