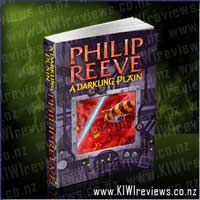 Disclosure StatementFULL DISCLOSURE: A number of units of this product have, at some time, been supplied to KIWIreviews by Scholastic (NZ) or their agents for the purposes of unbiased, independent reviews. No fee was accepted by KIWIreviews or the reviewers themselves - these are genuine, unpaid consumer reviews.
Available:
at quality booksellers

The once-great traction city of London is now just a radioactive wreck.

Years after Tom Natsworthy fled, intending never to return, he discovers that something stirs in the remains of the old city in this thrilling conclusion to the 'Mortal Engines' Saga.

I have often heard it said that the destination is not the point, it is the journey that matters... I have even read books like that, so thrilling in the telling that the conclusion can be whatever seems appropriate. This is not one of those books. In fact, it is quite the opposite.

My experience of the Mortal Engines series has been one of 'this should be good, but I have trouble picking it up again', yet when I got to the last quarter of the final book, I was hooked through the the thrilling and, dare I say, moving conclusion. This is one of those rare examples where the end really justified the journey.

All through Reeve's Mortal Engines series, he has been dealing with big questions - 'What would the world be like many millenia after a nuclear war?', 'What is right and wrong?' and most interestingly, 'How does one end war and make the world green again?'

His characters are all intentionally flawed and his themes resonate both with young adults (the target audience) and with adult readers alike. There are no characters that one purely dislikes, they all have their redeeming factors, but equally, there are things about all of the 'heroes' that make them in some way annoying.

I have been trying to work out why I have found reading this book so difficult when I know, intellectually, that is it well written and the story excellently crafted. I kept falling for minor characters throughout the books - characters like Theo, Shrike, Dr Zero, Fishcake etc and quickly coming to dislike the ones who were supposed to be carrying the story. Perhaps if they had been flawed in less annoying ways? Then again, I get the impression that their flaws were the point. They were never designed to be heroes in the traditional sense, but rather people you would never expect to end up being the ones to save the world. The ones who mean well are usually too scared to act and the ones who act don't give a damn - only together do they manage to 'save' anything.

For all that it was a slower read than I am used to, being immersed in Reeve's world is an experience I will not quickly forget. I am glad I pushed through to the end, because the destination really was worth it.

Though I have absolutely enjoyed this series, I found this last book a little harder to plow through. It could be because it is noticably thicker than previous titles, or it could be because the attempt to seal uop all the plotlines led to a little bit of a 'traffic jam' on the plot superhighway. Things just became a little 'incestuous' when it came to the characters... even taking into account how small the global population is in this era, I find uit hard to accept how the 'less than a dozen' main characters always seem to be teaming up with, or being taken prisoner by, the rest in succession. It was like a demented game of "Musical chairs" in places.

Forgiving that, the story is quite gripping as you approach the climax. As all good tales have, this has a wind-up that reaches out and grabs you by the eyeballs and says "You're staying right here 'til I'm finished with you, matey." And stay I did... to the detriment of my attempts to cook dinner, get a good night's sleep, catch up on overdue workload, etc.

Overall, though it may not be the very best way to end a storyline as I could hope for, it was still a great one. Taking into account that in this universe, the world is a horrific mess, a slightly ragged storyline can be forgiven... and even forgotten as you reach the last 100 pages or so. What a wind-up! I was especially taken by the absolute-ending... and would love to see more of Shrike's adventures... man, that Stalker really does get around!

Batman and Superman are on the case! After saving Metropolis from an alien invasion, Superman is now a famous Super Hero around the world. Meanwhile Gotham City's own guardian, Batman, would rather fight crime from the shadows. But when the devious Doctor Aesop escapes from Arkham Asylum, the two very different heroes begin investigating the same case and a young boy is caught in the cross fire.