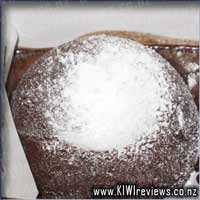 Disclosure StatementFULL DISCLOSURE: A number of units of this product have, at some time, been supplied to KIWIreviews by the company for the purposes of unbiased, independent reviews. No fee was accepted by KIWIreviews or the reviewers themselves - these are genuine, unpaid consumer reviews.
Available:
in store

A delicious chocolate cake with a warm, gooey middle. Baked fresh in store, it's perfect for one.

I make chocolate lava cakes at home all the time, we love them, and they are a quick, simple, easy to prepare, fun pudding that the kids love. So when Dominos introduced their own choc lava cakes a long while ago, it was only a matter of time before we would be trying them. That moment came when Dominos ran a promotion offering free lava cakes, and as an added bonus, you did not even have to make a purchase first. Ka Pai Dominos...that does not happen all to often.

So we all ordered our lava cakes, and having seen them advertised on TV, we all very excitedly went down to pick up our heavenly desserts. Isnt it funny how we all know nothing is ever like what you see on tele, but yet you still hold out that little glimmer of hope, that moment when for the first time ever you may just receive exactly what the tele portrayed. Well don't expect that moment with these lol

Yes they are a rich saucy dessert. Yes they somewhat resemble a volcano...not a big mum or dad volcano but more a little innocent baby kind of volcano. They don't ooze lava as such, but hey how much chocolate lava can a baby volcano have right? The price is okay, but I would not pay it all to often, I'm better off continuing to make them at home myself. Yes they are a lovely treat, just don't expect to much :)

One night, when my husband was out and it was fend-for-yourself for dinner, I ordered us some Domino's. In that order I included Chocolate Lava Cake for the choco-holic pre-schooler. I always like to give her a treat at the weekends and I didn't think the price was too bad.

When our order arrived, I was a little disappointed by the size of the cake. Cut up between two (one being under 4 at the time) the serving size seemed really small. We finished our pizza and then I offered the lava cake for dessert.

My daughter liked the sauce in the middle and ate that with a spoon til it was gone. She tried some of the cake as well, but didn't like that as much. I ate my potion and I found it really rich in flavour. The sauce was almost bitter chocolatey and not as sweet as I was expecting.

So overall, you wouldn't want a lot of this cake, and the portion size was probably quite appropriate. It is still fairly cheap, but not something you would get all the time.

Now this is one I wasn't entirely happy with. The TV adverts, as usual, show you something that looks far superior to what you get in the dinky little box... it's smaller, flatter and far less 'plump' than the adverts lead you to expect... and yet... I couldn't honestly say I would want a larger serving than you get.

You see, it's rich... damned rich. Sweet, chocolatey hea wrapped up in a dinkly little box... the outer shell is a smooth, silky choc sponge cake, with a gooey heart of sticky, totally sweet choc sauce that makes me realise where all the little pottles of choc dip from the Fudge Brownies now go, since I have yet to be offered one when I buy the brownies themselves.

Dust this delight with some icing sugar and you have sweet death in a box... -drool- As good as it was, I was forced to share a second one when one of our 'tasters' declined due to over-indulgence of the pizza kind. One and a half of these had me fizzing for a good 3 hours just from the sugar rush... but it was oh-so-worth it.

Overall, take care with this one. It'll disappoint you to look at it, it'll thrill your tastebuds when you try it, and you'll probably want a second one later... but you might regret it if you need to be asleep later. Gawd save us if they release a coffee one later!