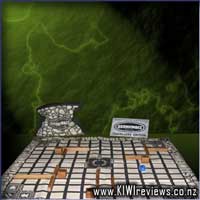 Disclosure StatementFULL DISCLOSURE: A number of units of this product have, at some time, been supplied to KIWIreviews by the company for the purposes of unbiased, independent reviews. No fee was accepted by KIWIreviews or the reviewers themselves - these are genuine, unpaid consumer reviews.
Available:
at selected game retailers

Race by the roll of a dice to your wall-change corner and back. Place walls as you move - to amuse and bemuse - and be the first one home to win.

But don't get STOMPED, or you'll have to start again!

We taught our 6 & 8 year olds to play this game these holidays and it was a hit! The youngest in our family was able to win it which is a huge bonus in my book.
The rules were easy enough to follow and it was fun enough for mum & dad to try to stomp each other

Rather than one of these mass-produced plastic and card game (with the emphasis on plastic) it is a joy to find a more organic game made from wood and cloth. Even the concept is quite organic too.

Once you have read through the instructions, which are clearly written and simple enough to understand, it was an easy job getting on with the game. I have tried so many games where the instructions seem to be so ambiguous that they need to be read through a number of times before playing.
The first time I played this game was trying to teach it to my daughter and two nieces. And once my daughter got around the concept of having to play by the same rules rather than make things up as she goes along, they all had immense fun.
The game was complex enough to get the kids to think, but also simple enough to understand the rules so they could get on with playing the game employing the best strategies to fox their opponents whilst helping them to win.
My daughter and her cousins have played this a number of times, both alone or with me and have enjoyed this game immensely. I'm sure if I had some adult company this game would get much more complex and stimulating and far more enjoyable than when playing this game with kids.
A great game with plenty of level to stimulate everyone from young to old.

I love a game that is different from the rest and stonewall sure is different to any games I have played in the past. I was really impressed at the manufacturing of the game too. It is great that it is made by people and not by machines stamping out plastic bits all day. Gives the game a more natural earthy feel. Something we should all be keen on these days instead of happily gobbling up the resources of our planet like parasites. While playing this I found myself to be the odd-man-out and got kinda stomped on in places so we made sure we shuffled around a bit between games so that everyone got a chance to be one of the pigeons as well as being the statue.

A lot of fun. We played at least 6 games before we realised it was getting late and it was time to pack up and head for bed. The next night saw us forgetting about TV and just playing this al night. That is something really unusual for our house where the TV rules with a carrot-on-a-stick held in an iron fist most nights. Loved the game and will be looking at buying a few spares to give to friends as presents as the year wears on. Well done folks!

I so love this game! Mind you, it's easy to like a game when you understand the strategies and kick a bit of butt when you play it. After playing Cathedral against some serious brainboxes for years, this game wasn't hard to grasp at all, and I had a lot of fun planning traps for my fellow players that suddenly sprang up around them with the placement of a wall or two seemingly at random... until they tried to take a direct route... anywhere.

However, I found the use of the "Change a Wall" squares to be quite under-utilised IMHO. I would have liked to have seen ALL the 'change' squares being active, and maybe the placement of a few more... make the board kind of like Scrabble, maybe even by adding "Add an extra wall" squares, and even some 'Random Act" squares, whereby you roll the die and if it comes up 1 or 4 you place an extra wall, 2 or 5 you relocate an existing wall, and 3 or 6 lets you remove an existing wall... or something like that... just to add some spice to the gameplan of even the most brilliant tacticians. Could name it "Stonewall : Sadistic Sod Version"

The game's components are wonderfully manufactured, the walls are embossed with stonework patterns and the fabric board can be folded up and tucked away, weighing next-to-nothing. The whole lot tucks away into a nifty little zippered cloth bag, so it can be tossed into the glovebox or carrybag for those trips away. Be interesting to play it on the Overlander train or something too... though the creases in the fabric don't like to be flattened out and stay there, causing some walls to be a bit unstable. I think I might explore the option of buying a spare playmat and hard-mounting it on thin plywood for use at home, and keep the fold-up version for portable play only.

Overall, a real winner, one of my Top-10 Favourite Games discovered through this site... sitting happily at around 3rd I think. If you like strategy games with a fun, fmaily twist, then you NEED to find this game at your local Quality Games retailer, or contact the manufacturers at their website, or via there toll-free number listed above. You won't be disappointed at all... and if you are... you were probably looking for a different game anyway.

I really enjoyed this game. The instructions were well written and easy to follow. The playing board is very unique and well set out. The artwork made it look professional and as if it was mass produced, not by a family business.

There was great gnashings of teeth for some people playing the game as they saw the path they had worked out for themselves come crashing down as the player before them placed a wall right in the middle of their intended path. The playing pieces were nice and simple, with cool designs etched onto them.

I look forward to more opportunities to play this game. I may even consider putting it in my games cupboard for those rainy days when there's nothing to do.

This was indeed a fun game to play. Despite being almost at the point of falling asleep at the game table at the time, I was easily able to get the hang of the game, and it wasn't long before I was placing walls down in the MOST annoying positions for my fellow players. The only problem then became... making sure that the walls I placed to interfere with the others' game paths, did NOT also interfere with my own!! Something that became increasingly more difficult as more walls were placed down.
Although definitely a lot more fun with just adults playing, I can easily see it being easy enough for children 8 years+ to get the hang of well enough to join in the family fun. With three players, the game is challenging, yet there runs a risk of one player being ganged up on, so I would recommend keeping it as either 2 OR 4 players... unless there's someone in particular that has annoyed you out of your game players, in which case, odd numbers would probably work more to your advantage! LOL!
A great game to be pulled out on a rainy day, the travel pack version makes it really easy to take with you anywhere, so a definite addition for the family fun pack if you're going away on a holiday!