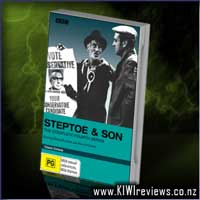 From its first series, Steptoe & Son quickly struck a chord with the public, and the weekly battles between father and son fast attracted enormous audiences.

Taken to great heights by some truly brilliant Galton and Simpson scripts, and the fine acting of Wilfred Brambell and Harry H Corbett, Steptoe & Son was a revelation and loved by virtually everyone. At the end of the fourth series, in 1965, the Steptoe & Son team decided to quit while they were ahead and announced the programme's finish. However, due to an enormous public demand and affection for the show, in 1970 the show returned to television - now in colour - for a further four series, again blessed with some sublime scripts. This DVD includes all episodes from the fourth series.

Galton and Simpson, the writers of this show, were also responsible for the sharp scripts of Hancock's Half Hour; and both of these shows are fondly remembered long after their first screenings, and still, to this day, through the occasional repeats, are winning new legions of fans.

The scripts are that sharply written that one can still feel the cutting edges almost 40 years later. Some of the victims of their humour may be gone and forgotten - but can be understood with no explanation needed.

Wilfred Bramble and Harry H. Corbett play the warring father and son combination so well and so vividly that no-one could ever reprise their roles without being compared to the two late-greats. These two thoroughly different men (who eventually came to loath each other off-screen) have such an on-screen chemistry that made the show both believable (for a comedy) and compulsive viewing.

I've missed the first three series being released, but I do look forward to seeing the remaining releases. For fans of English comedy, this is a must for your collection.

Trust me. You will not regret it.

BILLY is a personal story of New Zealand's most loved entertainer, Billy T James. This feature length drama goes beyond the public facade to reveal the man behind the chuckle.

Based on the biography "Billy T" written by Matt Elliott, award-winning producer Tony Holden brings a fresh vision and understanding to who Billy was. BILLY is a ... more...