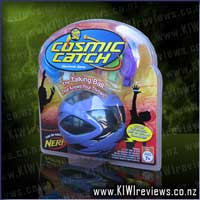 The only ball game where the ball knows your throws!

Place one of the 6 colour-coded bands on your hand and play your choice of 4 great games. As it zips around from player to player, it will call out the colours - like 'purple', 'blue' or 'red'... Now do what it tells you to do, and fast!

Get the whole crew together and have a blast!

The Cosmic Catch ball is available in 6 brilliant colors.

After reading the reviews on here, I decided to release the moths and buy one in an attempt to keep my daughter and her newly acquired cousins quiet for a few hours and out of my hair (so to speak).

What I didn't expect, that on Christmas day with a massive influx of my wife's family, that they too would be equally held captive by this deceptively simple toy. Now, here we are not just talking about kids. I saw teens fighting to play this game with each other, and I even saw 'kids' my age wanting to play too.

So despite me shouting at the kids to get this game outside where less damage can be done by lobbing projectiles at each other under the command of Cosmic Catch - the old kids seemed to ignore me. Oh well, at least nothing was damaged, save for a few bruised egos.

Which of the four games were played by whom still eludes me; however I do know all games were played until the batteries almost went flat. The older kids (ok, adults) seemed to play this game with increasing alcohol load which seemed to add to the fun and enjoyment of it.

There were plenty of shouts of disapproval at the referee's (Cosmic Catch) decision because sometimes it seemed it didn't recognise who had the ball quickly enough - however, I do know that everyone playing this game was trying to beat every record set by previous users, and although I should know what record was set and by whom, too much of the Christmas spirit seemed to erase the vital information from the old bean.

To play this game with two people is possible, but it gets more fun the more players involved and to play with a minimum of four players would be recommended by me. I did see one of the players with a band on each hand passing the ball between one hand to the other just to try to raise the bar for everything else.

The soft foam ball seems to belie the sturdiness in design inherent in Cosmic Catch and I feel confident that without pet damage, it will last many years of use.

All in all, if you have a tribe of kids at your house, or you expect to be inundated by a deluge of relatives, then this game is well worth the investment.

This was a lot of fun to have over the holidays. Though it isn't waterproof we managed to play with it just fine down at the beach, we just had to be very careful to keep it out of the water. There were only three of us, 2 adults and a child, when we arrived, but others soon joined us in sand-soaking, so it wasn't long before there were plenty of kids wanting to join in and eventually I was able to hand over my palmband and let the kids sort out the playing order themselves.
The ball is very sturdy, well able to stand up to the worst punishment the kids could reasonably throw at it (no pun intended) and I only had to step in, when I spotted a kid trying to step ON it. (Burying it in the sand was also a favoured way one bratt chose to employ to annoy the other kids, but we soon put a stop to that too. The sand didn't seem to do it any harm, thankfully.)
When the batteries finally ran flat, it fell to me to yell out colours or numbers to decide the play. i used the songs on the radio in the manner of 'musical chairs' to fake up a version of Game #4 and Game #1, a 'Pass the Parcel' variation.
A very cool toy. If you have a small clan of your own, this could be an excellent toy to get, to keep the restless hordes busy over the remaining holiday break.

Surprisingly a LOT more fun than I thought...

With parental consent, I 'borrowed' a couple of my son's classmate friends for an afternoon of play-testing this soft, padded, and rather louder than expected, foam ball at the local park. Each of the four of us chose a coloured palmbands, and after a bit of a struggle with the screwdriver, I managed to load the batteries, sealed it all up, pressed the button and away we went.

After playing all four games, the unanimous favourite was "Fast Pass" as it took little in the way of child brainpower. Next came "You're Out!" as the kids loved the mounting excitement as the ball's bleeping got faster and faster as it got closer to 'exploding' and knocking a player out. They didn't like the "being knocked out", but the lead-up generated a lot of laughter.

"Add One" came in a very close third place, but the novelty wore off rapidly with the youngest of our group, aged 5 and a bit... and alas "Crack The Code" really only scored at all with me alone, as I was the only one who really grasped the concept... so if you want to play game #2, make sure the kids are either have ages into double digits, or are budding Stephen Hawking's in training.

Overall, this is a great toy to have over the holidays, so hurry out and grab yourself one... especially if your kids are total socialites, or you have a small clan of sprogs. Even though the 'recommended age' is 7+, we had a very happy 5yr old in the group and he loved it. Available in a number of colours, there's bound to be one that comes close to your child's favourite colour... so sneak off to the toy store now, so that Santa can get them the right present this year.

I wasn't really sure what to expect when I was told about this game however having had really good experiences with previous Nerf toys I knew this would be a very enjoyable experience, and I was certainly right about that.

Luckily I had been given some "AAA" batteries along with this otherwise I would have had to rush off to the store to get some as we don't generally hold anything but "AA" batteries around the house, however I put in the batteries and off we went.

We decided to start off with the FAST PASS game first to ease us into it and boy was it fun, not only do you have to catch and pass the ball fairly quickly but you have to also remember who has what colour band on as the ball can detect who has caught it (it must make contact with the pad on the band for this to happen) and will then tell you who to pass it to next, however if you juggle the ball or hold it for too long the game ends and you have to try and beat the high score again. With the ability to have up to 6 players this is sure to be a lot of fun for family and friends alike.

Next we tried YOU'RE OUT! this is kind of a mix of FAST PASS and "Pass the Parcel" in that the ball tells you who to pass to next however if you are the person holding the ball when it "explodes" then you are out and the game continues until only one person is left and they are the winner.

We then gave the game ADD ONE a try, this one was a bit tricky for some in our family as this game will really test how good your memory is. First off you program a colour sequence into the ball by throwing it to each other, however it then starts getting tricky as after each round you have to add another pass onto the sequence and then do it backwards this was however extremely fun for me (coz I won this one

And lastly you have CODE CHALLENGE this has to be the most mentally challenging as the ball picks a colour sequence and then you have to figure out what it is in the time given. Once again a good memory is quite essential especially when you have all 6 colours in use, just don't ask me how many possible combinations there

Your heart's pounding. Your hands start to shake. Just pull this one stick and you're home free. Oh no - there goes another Tumblin' Monkey! Easy to learn and fun to play, Tumblin' Monkeys is full of surprises.

•  Place the monkeys in the tree and move the sticks according to the ... more...