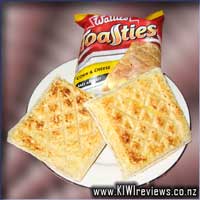 Disclosure StatementFULL DISCLOSURE: A number of units of this product have, at some time, been supplied to KIWIreviews by Watties or their agents for the purposes of unbiased, independent reviews. No fee was accepted by KIWIreviews or the reviewers themselves - these are genuine, unpaid consumer reviews.
Available:
at supermarkets

We all love a good toasted sandwich. But sometimes we can't be bothered making them. Now Watties has solved that problem with their new range of pre-prepared Toasties. These are a true heat and eat snack. Simply take one out of the freezer, drop it in the toaster and you're away laughing. Toasties come in a range of flavours including Baked Beans; Ham, Cheese & Onion; Cheese & Onion; Corn & Cheese; and Cheese Lovers.

I love toasted sandwiches they always make a tasty lunch while at work, or a yummy quick dinner option that is super quick to throw together when your a bit short on time or in a hurry. I was pretty excited when these first came out on the market, and to be honest I did go a bit overboard stockpiling my freezer with several packets of these, it was as though my quick and tasty lunch and meal idea had suddenly gotten even easier. Corn and cheese is actually one of my favourite go to fillings for when it comes to making toasted sandwiches so I was impressed to see that this flavour was available, but most importantly how it compared to my homemade ones.

Each pack of toasties came in a pack of 2, and the first thing I noticed about these was the fact that they were crustless, great for fussy children, or those who didn't like crusts on there bread! The bread had a pattern to it, it looked to me a lot like grilled toasties that you can order from many restaurants in America, perhaps this was the effect they were going for? The toasties were super quick and easy to prepare, simply place them into your toaster, pop them down and leave them to heat and go crispy on the outside, although I found most of the time that once down in the toaster was enough, this did vary depending on whether I was using my home or work toaster and whether the settings had been played around with since last use, so something to be aware of!

The filling was really good, and tasted just like homemade, lots of stretchy melted cheese, and a good amount of creamy creamed corn a perfectly matched combination. The bread tasted fresh and crisp, however the fact that it wasn't buttered prior to toasting did change the taste slightly in my books.

Overall this was one of my favourite go to lunches, which sadly Wattie's took off the market a few years back now, if they wanted to make a comeback i'd definitely be buying them again!

The corn and cheese filling is so yummy, it is creamy and oh so tasty and when heated in the toaster the bread is toasted to crunchy perfection like it has just come out of the toasted sandwich maker. The cheese and corn are in a creamy cheese sauce and this makes the toastie better than what I can make from scratch because a slice of cheese melted just does not compare to the cheesey sauce in these little beauties.

This isn't my first choice of toastie to buy from the supermarket but I do enjoy it as a change from the toastie that I love eating. But at this stage of things I would gratefully accept any toasties back in the freezer department at my supermarket. I miss them and miss having them for my lunch time meal.

Oh Yummmmm i love these Corn and Cheese toasted sandwiches! It probably helped that this is by far my favourite flavour of toasted sandwhich anyway and to be honest i havent tried the other flavours in this range. They are quite simply a life saver at times when you need something quick an easy to eat that isnt completely bad for you at the same time.

From day 1 I never bothered to thaw these out, instead just putting them in the toaster and letting that do the "thawing" for me ~ way quicker all round and tastes exactly the same in my books. I found these great to just have in the freezer for a last minute called upon lunch idea or even just a snack at home. Only downfall is you could probably eat two packs each time if you dont have something else with them. I also wouldnt have minded if they had left the crusts on these tasty morsels ~ I assume they thought it would be more appealing to take them off.

The biggest problem by far however is after seeing the reviews on here and thinking ohh yum I havent had one of those in ages when I checked the supermarket to buy some it seems they have gone?! :(

This one was pretty good actually. Not the greatest but nowhere near the worst of the range by any means. The corn was nice and the cheesy was creamy and carried at least some flavour but the whole thing had a slightly floury taste to it. Cooked as easily as the rest of them. Unlike the others this one was far better cooked in a pan instead of a toaster. It was also really nice when cooked and slapped on a plate with some sliced tomato on top and some pepper and salt eh. A pretty good option if you want a snack.

Even though this one scores a bit higher, because of the nutrition value of corn, It was a very close third place by my tastebuds. Just as easy to cook, from frozen or thawed as all the others in the range, and pretty much as tasty. Basically they are all so nice, it will come down to personal choice.

The bread is real bread, not some kind of processed pap... this is clearly proven by the occasional crust that didn't get trimmed off, but instead snuck inside the mould and was missed by the cutters. No bad points for that from me, I love toasted crust! But some might want to make sure there is another family member or friend handy to snarf that sandwich while you toast y'self a replacement... or two... or...

Overall, another great flavour, only JUST beaing beaten out of second place in my list by the delightful Ham, Cheese & Onion. Something I would love to see would be a toastie like this one, with come bacon added, or a bit of onion, or better yet, BOTH! -drool- Bacon, Corn, Cheese & Onion... -staggers off to locate the keyboard's raincoat... and stick another toastie in the toaster-

Oh yeah this is my favourite. I love corn. It goes good boiled, roasted or BBQ'd and it goes totally righteous in a toastie stuffed with dripping cheese, and cooking it on a bbq with some chili and avocado oil, on man, it just defies words.Now this is hardly peak bbq season so I figured I would hold a couple back and try them in a frypan since I got my samples home and most had thawed out. No chance to stick any in the freezer. Fired up the stove later that night after the whanau had gone home and had some for a naughty midnight snack. you dont need much oil or butter in the frypan because there is some kind of butter replacement already painted on the outside of the bread. I just used a small dribble of plain oil and flipped these around for about 4 minutes. Flip them out onto a plate and while the filling is hot stuff them down the gob. Nice.

Great In a stir fry, and as a marinade with chicken, fish and vegetables.

•  Suitable for vegans
•  Gluten-free
•  No artificial colouring or preservatives