Ripley's Believe It Or Not! Expect the Unexpected review 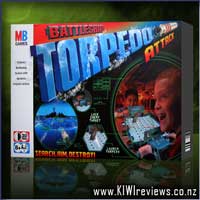 Set up your fleet, scan the radar, crew to battle stations. When you find an enemy ship, lock target, aim your torpedos and fire. Can you blast them out of the water? You have just 3 chances to hit your target.

I have always been a fan of Battleship-style games... I can recall back at primary school how we would play a game with a couple of sheets of paper and a pencil, whereby each fleet of ships was drawn on a sheet of paper and placed face down in front of each player. Dots were drawn on the backs of the sheets by the opposing player, and then checked for hits or misses.

A hit was admitted and marked (usually by circling it) and each ship was sectioned off into a pre-defined number of hit-boxes. A hit in each hit-box sank the ship. Sure, it was simple... but it worked amazingly well and it allowed ships to be placed at any angle, increasing the difficulty of the game.

As the game has evolved, I have taken great pleasure in following it, and this latest incarnation has got to be one of the most fun yet. Not only do you get to play Battleships with the boards, models and pins, but when you have located all of a ship, you get a chance to fire torpedos at it across the board and score points!

With the end goal being to score 1000 points to win, you have to learn great skill with the torpedo launcher, and the use of a periscope system both enhances the gameplay, and increases the difficulty. This can mean that more than one setup of your fleet is required to win the game, instead of simply the winner being the first one to sink all the opponent's ships.

Overall, this is quite possibly one of my favourite boardgames to play with my son, after chess, because it gives him a chance to utilise his brain in the location of the ships and selection of firing coordinates, but also gives him something a little easier to relax with when it comes to shooting them out of the 'water' when he does get a row or red pins lined up. My only TINY gripe was that we ran out of red pins as the game neared the end, and I would have been happy to fork over a few dollars more to get a larger bag of them.

Stalking lions, charging rhinos, snapping crocodiles, and other dangerous creatures - in the wild world of Jumanji, they're only a die roll away!

Grab your pawn, roll the eight-sided number die and move through the jungle. Draw a danger card, then use your decoder to discover the secret message and see if disaster strikes. Your fellow players must race against time to rescue you. The jungle threatens and begins to fill up the ... more...