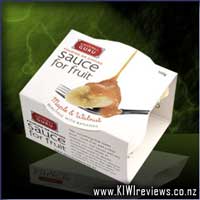 Again, another yummy flavor. Used as a fruit dip. I used apples. Kids didn't like this flav as much as the choc, but I found it ok. Good value for money. Would buy again

The blend of maple syrup and walnuts in the sauce is perfect. The walnut helps to cut the sweetness that can be overpowering in sweet sauces.

This sauce is a great addition to any dessert, be it ice cream or just plain fruit. It is a little thicker than an average sauce, but I found that a good thing as it coated the fruit better.

Since trying this particular flavour, I have been tempted to try other combinations of flavours. Especially the ones mentioned in the other reviews. The price is particularly reasonable, as other sauces of this type can cost at least 2-3 times what you would pay for this in the shop.

Overall, an ideal addition to the pantry for those summer desserts or if you want to jazz up a warm winter supper.

Again, this was trialed with fresh fruit and french vanilla ice-cream by me and my family.

I mostly ate mine with my ice-cream, mixing it through, which was a lovely combination.
I didn't find it runny enough to effectively use as a dipping sauce however, and had to be more picky about which fruits I did try and dip - pear was lovely however...

Family comments were widely varied, the younger members of the family didn't rate this one at all, but my mother, father and various others all raved about it - in fact my mother confiscated my unopened containers of it to keep for herself.

For me, this was a more limiting flavour in ways that is could be used, and as I said previously, wasn't as good for pouring, but I enjoyed the flavour and would probably buy it over some of the other flavours.

I could find many uses for this dip. I tried it on banana - liked it, I also tried it on orange - liked it, and even ate it just by itself. Found this one to be better if it's warm.

This one went really well with Pikelets and Pancakes, and I even gave it a whirl with some apple and it went down a treat.

I will have to do some more experimentation with this one as it holds great promise and could easily be the most versatile sauce of them all.

After a particularly pleasing experimental session in the kitchen, I found myself with some fresh, piping hot pancakes, some freshly fried shoulder bacon, and a spare banana... "Oh dear, whatever am I going to do with this lot?" I wondered casually, as my hands flew into action, layering these fine ingredients with some good ol' NZ Butter and lashings of this delightful sauce...

As I gathered up my tools of trade, and started to snarf gustily, I found myself wishing there was a little more of the maple flavour coming through... a problem which was remedied thanks to a handy bottle of genuine authentic Canadian maple syrup that I just happened to find in the pantry. -snigger-

Not usually a fan of walnuts, due to overzealous additions into family Christmas cakes over the years, I none the less found it a very pleasing, and highly enjoyable, companion to this meal. The nutty flavour helped to offset the saltiness of the bacon, and it's lack of sugary tang stopped it from become sickly.

As a bit of an experiment that evening, I took some slightly softened vanilla ice-cream and mixed it 4-to-1 with this sauce, rolled it into a sausage in plastic wrap and popped it in the freezer to set. After it was solid, I cut it into lengths and used them to fill some freshly cooked, rolled up sweet waffles... I love experimenting with food... these, drizzled with some of the Caramel and Cinnemon sauce mixed with a dash of Opal Nera, made for a stunning dessert treat later that night.

Overall, a wonderful ingredient, so full of flavour, and more importantly, potential. If you enjoy your food, you'll love this sauce, and the others in the range for their sheer multifunctionality! (Tray saying that 5 times quickly after a few shots of Opal Nera!

This sauce has a pronounced and balanced flavour; however, I find I would like a little more maple syrup in it. Possibly because I just love maple syrup. Maybe others would disagree with me.

Even at room temperature, this a little firmer than the chocolate sauce, and as such, it doesn't tend to pour. That aside, it makes the product nonetheless usable and I can assure you that there has been no compromise on flavour.

This sauce is probably more of a dipping sauce rather than a pouring sauce. And I suspect it would combine with many other ingredients to increase the versatility of this product. Made into a mousse, or stirred into popcorn. Maybe topping cakes, maybe over ice cream. Even fruit. The flavour is such that you will find many uses for it and you will invent excuses just to fork out the amazing $2 to buy more.

An assortment of your favourite licorice allsorts, jumbo sized for extra bite!

A family favourite back to stay - every colour is a different flavour.