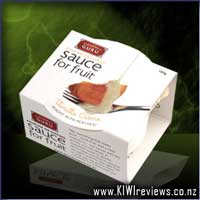 Disclosure StatementFULL DISCLOSURE: A number of units of this product have, at some time, been supplied to KIWIreviews by Gourmet Guru or their agents for the purposes of unbiased, independent reviews. No fee was accepted by KIWIreviews or the reviewers themselves - these are genuine, unpaid consumer reviews.
Available:
at supermarkets

None of us liked this flavor. It was very sweet and didn't really have a lot of flavor. Threw most of it out.

I found this sauce quite sickly-sweet. We tried it over ice-cream which was way, way too much of a sugar overload. We then tried it over peaches which worked quite well, I think you definitely need to team this sauce with fruit. Strawberries might be a nice match too. This flavour might go nicely with a peach cobbler or rhubarb crumble.

French vanilla ice-cream and vanilla sauce aren't really the best of mixes - I think the ice-cream overpowered the sauce to be honest...

However, with the fresh fruit, this was a better sauce...
The consistency was still a little on the gluggy side, it could have been slightly more runny. It did taste good with most of the fresh fruit, though wasn't anything to write home about to be honest.

Some comments:
Dad - It's a little plasticy
Partner - It tastes more like white choc
Grandfather - What flavour is this again?

I think that this flavour was trying hard to be something, but didn't quite get there.

Hmmmmmmm don't know what to make of this one yet. Had it on nectarines and plums, it certianly tastes good but perhaps too vanillary or sweet or too good for words. More testing required I say.

Not really a strong flavoured sauce, I am not 100% sure what the story with this one could be. As something to offset a strong flavoured dessert, such as Brandy Pudding or maybe a strong Trifle, it might do well, or as a flavour-additive to whipped cream to make it a little less bland, that could work, but other than that, I admit to being at a bit of a loss to decide what I would do with it.

Overall, though still an interesting and tasty morsel, this would probably the least practical of the range in my humble opinion. Experimentation by those with more of a 'subtle taste and texture' mindset will probably unlock more potential for this one.

Hmmm, Vanilla, well it's certainly a safe flavour, but I had trouble deciding what it would go good with, I think as a topping on some cereals instead of yoghurt it would be great, I did try it over sliced banana's instead of custard and that was a little too sweet and had to be dulled down a little. Overall the least versatile of the lot, but still nice none the less.

For some reason, this flavour attracted my daughter more than it did me. There must be something so homely and familiar and 'safe' about vanilla that just attracts everyone (me included), but some just clamour for it more.
It was all I could do to stop her adding it over her breakfast cereal - which I may give in and allow as an evening treat at a movie night - perhaps it would go well with her favourite TV snack 'Nutrigrain'.

At company's suggestion regarding trying this sauce with stone fruit, I suspect they are correct because stronger flavoured fruit will kill the taste of vanilla, but many more foods could benefit from the subtle flavours of Vanilla Creme and you are only limited by your own imagination and your will to experiment.