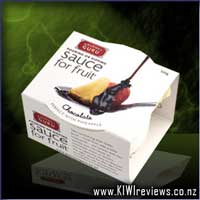 This was my favorite flavor. We used the sauce to dip apples in. It made a great afternoon snack. I think that it would be yummy on ice-cream.

Running at a close second after the caramel, this chocolate is also quite stunning. A great dip, drizzled over ice cream, or in shakes. Could easily see this being the topping of a really rich mudcake, or being used to make a really stunning choc mousse. If only they could get this stuff into Domino's Pizza to replace the sauce they use with their fudge brownies, it would add something really special to them.

I trialled this sauce with fresh fruit and french vanilla ice-cream... and so did my whole family.

I enjoyed the consistency of this sauce - it was runny enough to pour, but stayed on the fruit enough to still give you plenty of choc flavour.

Some of the comments from the family were as follows:
Dad - It's about on parr with the rest of the sauces on the market
Younger Brother - It's the only one I like :)
Grandfather - Is there more?

Overall, this sauce was the best for dipping fruit in, was solid in taste and texture and I think it could be used for a wide variety of desserts.

This sauce is gooooood, I tried it on strawberries and raspberries and by the end it was hard to tell what berry I was eating, it was mostly chocolate. Next time ice cream will be in the mix too.

$2 won't buy very much these days. Even a chocolate bar will set you back almost $2 from a garage and that is such a transient treat.

Imagine what you could do with some chocolate sauce? One that really tastes like chocolate - and this one really does. With a deliciously strong chocolate flavour and one that doesn't taste sickeningly sweet either, you will find plenty of uses for this sauce.
The chocolate sauce is of such a consistency that it can be poured straight from a cupboard at room temperature, but when left in the fridge, it needs to be spooned out. There is such a silky texture, and pleasent mouthfeel that one will not be able to resist the accompanying chocolate addiction that will ensue - and it will. Believe me.

Drizzled onto icecream, fresh fruit, waffles or pancakes or anything that you think will be enhanced by lashings of chocolate sauce you can sure will be enhanced to utter perfection by the Gourmet Guru's Chocolate sauce for fruit. I've not tried, but I suspect that if this was mixed with cream, it would make a wonderful chocolate cream for a cake, or if mixed into whipped cream, one could have chocolate mousse. Maybe drizzled over fresh popcorn?

The concept is so simple, the product is so versatile that like the dreaded cliche that follows, you will find the uses for this product is limited only by your imagination and creativity.

Okay this is different was my first thoughts when these were delivered to my door, but being the adventurous sort I am I dipped right in so to speak. To be honest I was not sure what I was expecting when I first tried this but I was pleasantly surprised by the smooth chocolatey taste which was not overpowering at all and allowed the taste of the fruit to mix with the sauce and produce a wonderful taste sensation. It was recommended to try it with a banana and that suggestion was spot on. Unfortunately I had no strawberries handy to try it with but I imagine it would taste absolutely devine.

Not often I find a choco sauce I like... too often they are horribly sweet, have a strange tangy taste or just taste out-n-out wierd... but since this was on sale, it is a Kiwi product, and one I hadn't tried before, I thought I would give it a try... and am very glad I did!

To trial it's possibilities, I ran it through a few possibles... first off, the obvious 'drizzled over fruit salad and ice-cream' test... after a bit of time in the fridge due to the summer heat it was a bit too thick to pour, but a few seconds in the nukebox fixed that, and a few spoonfuls later I was enjoying a truely delightful dessert.

Second trial, the 'dip it then snarf it' test... grabbing a banana, some pineapple, some watermelon, a few strawberries left lurking... and away we went... sure enough, delightful! The choc wasn't too sweet or bitter, it had a nice taste balance that didn't overpower the various fruits, which was a really excellent sign.

And now, the ultimate test... the 'flavoured milk' test... this is a 2-part test, firstly, a spoonful of sauce in a little milk, blended by spoon until combined well, then more milk to make a milk drink that, when tasted, rivalled Milo. This is saying something. It was a little more difficult, but tastier, than the Chocolate Sipahh Straws. For the second part, I used my Magic Bullet Blender to whip up a choco thickshake, using a few spoonfuls of the sauce as flavouring... Now, I like my shakes so thick you need to hammer the straws into it, which also means it needs a fair bit of flavour... and 2 tablespoons of the sauce did the trick wonderfully, giving me a truely satisfying summer slurp.

Overall, this has to be one of the yummiest premade fruit sauces I have tried in years, and I look forward to tasting the rest of their range as and when I can... and if you enjoy a good sauce, I am sure you'll really enjoy this one.