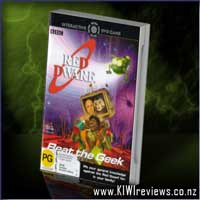 Disclosure StatementFULL DISCLOSURE: A number of units of this product have, at some time, been supplied to KIWIreviews by the company for the purposes of unbiased, independent reviews. No fee was accepted by KIWIreviews or the reviewers themselves - these are genuine, unpaid consumer reviews.
Available:
January 2007

Beat the Geek allows you to play as Viewer, Geek or General Knowledge contestant. Travel the length and breadth of Red Dwarf in an eight level interactive journey to major locations from the series: play alone, against a friend, or in teams!

This release rewards the hardcore fan for their encyclopaedic knowledge, the regular viewer with an entertaining experience or other family members who haven't seen the show and think that floating head bloke is funny.

Are you a Dwarfer? Know someone who is? Then this should be on the shelf along with their other RD prize posessions. With three types of player; General Knowledge, Viewer and Geek, anyone can play it. For the die-hard Dwarfer, select 'Geek'... average watcher and fan, select 'Viewer', and for those who just don't want to be left out while the fans play a stunning trivia game, select 'General Knowledge'.

I was impressed at the interaction and programming behind the game. DVDs aren't the smartest of computers and so highly involved calculations aren't on the cards, and yet there is a reasonable degree of randomness built in. This works really well, allowing you to play the game over and over, yet never the same twice.

Overall, as a bit of a "Boy from the Dwarf" m'self, and proud owner of all the 8 released-to-date seasons of the hit show, I found this to be a great way to pass a few hours testing my knowledge of the cult TV classic. I loved this game, and would highly recommend it to any fan of the show, or as a suitable gift by any friend or family member of one.

In this latest addition to the Top Trumps Specials range, Harry and his friends (and those he is not so friendly with!) are rated on categories including 'Magic', 'Cunning', 'Courage', 'Wisdom' and 'Temper'. Two or more players can play. Players deal the cards amongst themselves and one ... more...