« The Roses of Roazon review 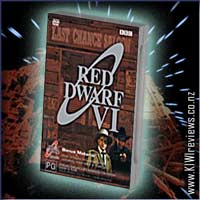 Psirens:
In pursuit of the stolen Red Dwarf, Lister and Co are attacked by Psirens - creatures who lure space-farers to their deaths with a lethal combination of telepathic manipulation and scanty clothing.

Legion:
Supplies are low. The water has been recycled so often, it's beginning to taste like Dutch lager. Then a malfunctioning guidance beam drags the Dwarfers to a deserted space station...

Gunmen of the Apocalypse:
Kryten contracts a deadly computer virus, and Rimmer and Co are forced to enter his electronic mindscape. They find themselves in a wild west town, facing a gunfight against metaphysical gunslingers.

Emohawk - Polymorph II:
The Dwarfers need replacement engine parts from the fearsome stomach-churningly ugly "Kinitawowi". But the GELF tribe are interested in only one trade: Lister must marry the chief's daughter.

Rimmerworld:
Trapped aboard a disintegrating ship, Rimmer abandons his crewmates, taking the only remaining escape pod. As he accelerates towards a nearby wormhole, he discovers the pod has no steering controls.

Out Of Time:
When an identical ship materialises alongside Starbug, the crew are alarmed to receive an SOS call from themselves fifteen years into the future.

Of all 6 series of Red Dwarf so far released, this would have to be the lowest point I am afraid. Still classic comedy, still the same 'out there' characters and plots, but you can clearly see the scriptwriters need a few more cans of Inspiration Fizz to get ready for Series 7.

The lowest scorer: The 'Rimmerworld' episode is just plain disturbing, leaving my skin crawling at the thought of a planet filled with Rimmer clones, male AND FEMALE, left to their own devices for 600 years... not a pleasant thought at the best of times.

The highest scorer: 'Legion' with the introduction of Rimmer's HardLight lightbee (holographic projector). As the director says in the blurb "His cowardice had reached the breaking point of credibility - why be scared of anything if nothing can touch or hurt you?" which I felt was a very valid point... however, they then botched it by making his new HardLight self the almost opposite, where everything could touch him, but nothing could harm him still! However, Kryten's efforts to render him 'unconscious' gave a few moments of hilarity, as did the anti-matter chopsticks scenes.

The remaining 4 episodes were just... a bit bland in key places. left me a bit disappointed. However, I am a die-hard Dwarfer, so I still found a way to get past the innumerable lame metaphors Kryten managed to drum up at short notice, and still had a good laugh... in places. Enough to make it worth having, if for no other reason than I hate holes in the middle of a set of titles.

Overall, if you have Series 1 to 5, you'll buy it for the sake of having it, but don't expect any wonderous gems of humour in this box.

Criminal Minds revolves around an elite team of FBI profilers who analyze the country's most twisted criminal minds, anticipating their next moves before they strike again. Special Agent Jason Gideon (Mandy Patinkin) is the FBI's top behavioral analyst and he joins the Behavioral Analysis Unit lead by Special Agent Aaron Hotchner (Thomas Gibson), a family man who is able to gain people's trust and unlock their ... more...