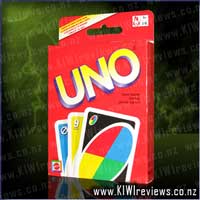 Disclosure StatementFULL DISCLOSURE: A number of units of this product have, at some time, been supplied to KIWIreviews by Mattel (NZ) or their agents for the purposes of unbiased, independent reviews. No fee was accepted by KIWIreviews or the reviewers themselves - these are genuine, unpaid consumer reviews.
Available:
at quality retailers

Got family visiting, or hosting a party for all ages? It's time for Uno, America's Number One brand of family games. Easy for everyone to play, and it's fast and fun for anyone!

Quite a few years on and I have a 4 year old. I saw UNO on special and decided it might be time to grab our own set of cards. My 4 year old son picked up the rules in about 5 minutes and we played many games those first few days while he got his head around it. He was an instant fan!

I love that we can play it when it's just the two of us at home and its easy to add extra players if aunties, uncles, grand parents or even my son's great grand parents, who introduced me to the game, come over.

To be honest, we haven't played it in a while, I'm afraid it has disappeared into the piles of games and toys in his room, but writing his review has got me excited to pull it out again. I shall endeavour to hunt it out tomorrow while the smaller child sleeps and create some more great memories.

I love card games, especially ones that are easy to play. I am not a fan of any games (card or board games) that take a long time to grasp the concept of play, or a long time to explain to others how to play. I have three children aged from 7 to 14 and we like to have family games nights. So it is imperative that any games we play are suitable for all members of the family.

Uno is one of those card games that can be easily played by a group of children, a group of adults, or a mix of both. It is a take on the good old fashioned card game 'last card'. The cards are nice bright colours, that are appealing to children, making it easy to understand and follow. The cards are made of good quality card, and are also slightly larger than a normal card from a card deck. And they all pack nicely into the presentation box too.

The instructions are simple and easy to read and understand and because the concept of the game is simple, explaining game play is easy and once you grasp the game it is also easy to remember how to play for next time. The price is probably a bit more than most would want to pay for a pack of cards but it is worth it. I taught my kids how to play good ole fashion last card. They actually found it boring. But all three of them love Uno, so it is definitely worth the extra dollars spent.

As a games fanatic, I'm always looking for games that I can introduce my 5 and a half year old to and recently I discovered Uno (neglected) on my shelf and despite it saying age 7 and up, I decided we would give it a go. Well I'm certainly glad I did - she was instantly hooked and we are currently playing it up to 10 - 20 times a day ... she loves it! Hopefully it will die down a bit to a game or 2 after dinner soon!

It plays like last card - a game we were all brought up on and where rules were varied, but luckily Uno comes with clear rules although there's nothing to stop you introducing a few house rules should you wish. The appeal of using this rather than a standard deck of cards is that the cards are well-designed and clear for a young child to understand. I think that a 5 year old would perhaps not cope with this game played with standard cards but with the Uno cards this is not an issue.

I love that I discovered this game at an age where my daughter can really enjoy it, but us parents love it just as much so I can see this being a family favourite for many many years! It plays just as well with 2 as it does with more, and games are usually so quick that it's no chore to fit in a quick game here and there. I personally think it's well worth the money buying the specialised cards.

Out of all the games we own, UNO is the one that gets the most 'outings'! We always pack uno to take on holiday and convince the others that share our holidays that they must play. Once they are convinced into playing, they too are hooked!

Very easy to teach and so so much fun! Two people can play and still have as much fun as 4 or 5! Highly competitive and a fast paced game. It is also a game that can change in an instant, making in unpredictable and exciting!

Love that it is compact, and cheap! making having a couple of packs a really east and affordable investment for quality 'family' or' 'friend' time! Play with some nibbles and drinks for a fun night in, or a quick game to fill in time, its simple and easy!

It would make a great secret Santa gift for the workplace, or a tweens birthday gift! Even a gift for the person who has everything!!

When I was about ten years old my auntie came over from Sydney with her children. They brought with them a pack of Uno cards. We played the game for hours with our cousins. When they returned home they we missed the cards so much that Santa had to give us some.

Uno is a very simple game to learn. It is basically the same as Last Card. I would recommend it for anyone over eight years. Adults enjoy playing it too. It can become a very competitive game. Uno is a reasonably quick game so it tends to hold the attention of the players.

As an adult whenever I play Uno I am reminded of the great times with my cousins. Of course if playing with just adults it can become a drinking game. Uno is a game I love. I can't wait until my girls are old enough to play it with me.

I have a 6 year old and a 7 year old who love this game and have been playing it for well over a year.

Its the kind of game you can spend 10 minutes playing or if you have time sit down for an hour and play. It's fun, easy to learn and yet it's not boring. It can also be taken anywhere as its just a small pack of cards.

As a mum I like it as the kids have to keep focused and it teaches them numbers and matching.

Highly recommended for all families to have a pack of these cards.

I've never been into more than one person card games but as a teen my parents talked
me into trying it. I've been hooked since.

Its easy to understand and easy to teach others how to play, even my daughter who has a short attention span enjoys UNO.

I love this game it rocks!! It's like 'last card' but much more fun! The cards are all colour coded, which makes it easy to understand. I find there are quite a few cards (108) which means for my little hands I have to put them into two piles to shuffle easily.
Once you've played one game, you're hooked. I find myself saying 'come on have another game', my opponent only ever so reluctantly agrees.
I played this game first when I was about 8yrs old, now the game is still the same with some slight tweakings, the cards have a new look, as the reverse cards only have arrows where as years ago I remember the cards actually saying reverse on them to help people that didn't understand pictures. And the wild card has pictures, without saying wild card on it too.

Overall it's still the great game it used to be, and now since I've been reintroduced to it I'm always nagging my hubby to play with me!

By far the best "Last Card" variant I have ever come across, this is a classic card game from back when I was a pup.

Like riding a bike, you simply can't forget the rules once you have mastered them, and even my 8 year old son is a master-class Uno player now... and he's only been playing for less than a month!

The pack is about the size of 2 standard decks, allowing you plenty of cards to play with, yet remain small enough to drop in the purse or carry-bag if you plan to head out. I popped a pack into my carry-on luggage on a recent trip to Aussy, and had a lot of fun playing it on the plane with a couple of other passengers, one of whom had never heard of it! (Don't know what rock he had been under for the last 2 decades, but hey! By the end of the flight, he was a convert too!)

Overall, if you enjoy card games, and want a game that can be as simple, or as strategic, as you decide to play it, then you need a pack of Uno!

I have been playing this game for years.
Learning it as a Seven-year-old was easier than Scrabble, or Monopoly, but I found it as fun then, as I do now, Twelve years later.
Matching Colour, or picture. It's that easy! But try not to get caught by another player with a Draw Two or a Draw Four card, or you get even farther away from getting UNO!
If you get to one card left in your hand, you need to call UNO! otherwise, you have to pick up two more cards!

So pick up a pack today, get ready to start counting, and start hoping for rainy days, or any other excuse to play!

Score: 7.5
Product reviews for listing 101: The Lord of the Rings : Return of the King -  Developed by EA Games

LIVE THE MOVIE. BE THE HERO.

FORM YOUR FELLOWSHIP
- Fight with a friend in multi-player co-op mode.