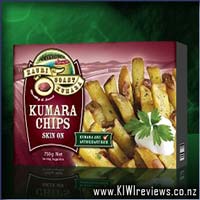 Kauri Coast Kumara Chips are hand selected to provide you with the finest quality Kumara chip.

The skin of the Kumara provides a large amount of the Kumara nutrients including fibre, vitamins and minerals. This is why we have chosen to prepare these Kumara Chips with the skin on.

Kauri Coast Kumara Chips require quick preparation and are ideal to serve as a snack, with sour cream, or as an addition to any meal.

I love Kumara and having tried many of the other products from Kauri Coast Kumara I was very keen to give these Kumara chips a try, and I was so glad I did as these were by far my favourite product in the range so far.

Right from the start the product looks so natural and yummy, the chips are packaged in a box rather than in a bag like most other chip varieties on the market, and best of all they are made right here in New Zealand. I love that by buying these I am able to support a New Zealand supplier and also that the packaging itself is so easy to recycle being cardboard!

I have had Kumara chips many a times at restaurants so was excited by the idea of having ready made Kumara chips in my freezer that I can cook up at any time I feel the need. The frozen chips looked like they wee made from a high quality Kumara, and I loved the size and thickness of them, it was perfect. I noticed that the skin was left on the Kumara, however this didn't bother me as i'm all for the added nutrients and extra crunch that this would provide these chips with.

These chips were super fast to cook, I popped them onto my oven tray and added a splash of oil and a sprinkling of salt to help make the chips even crunchier, and 20 minutes later they were cooked, the smell coming form my kitchen was divine and I couldn't wait to eat them. I was most impressed by the texture of these Kumara chips, crisp and crunchy on the outside and soft and fluffy on the inside, they tasted amazing especially with a side of aioli.

Having cooked these several times now I must say they are great, they make a fantastic snack on there own accompanied with your favourite dipping sauce, or a great side dish to any meal. if you like Kumara your bound to like these!

I am a huge fan of kumara... after all I am from the Kumara Capital Dargaville so I grow up on kumara!! I was told about this product so on my next visit to the supermarket I sort them out in the freezer department. At the time I bought them I was having my kitchen renovated so they sat in my freezer and teased me for well over 1 month....but the wait was well worth it!!

I love that the chips are in a box...recycling the packaging is definitely a bonus (rather than a plastic bag!) and even frozen they looked delicious! I cooked them to the directions on the box but the chips weren't crispy enough for my liking so I popped them back in the oven and they crisped up in another 5 minutes. The smell was so good, I was so looking forward to trying them and I was not disappointed.

My only disappointment was there wasn't enough chips in the box!! Next time I think I will be buying 2 boxes. Yes they are just that good and when paired together with good old tomato sauce, mayonnaise, even sweet chilI sauce and sour cream, I tried them all and every condiment went well so whatever your taste buds desire kumara chips go with them all.

I didn't think having the skins on the kumara chips was a bad thing as half the time I can never be bothered to peel my kumara when I eat them normally (not as a chip) plus all the goodness and nutrients are in the skin so I am doing the healthy thing by leaving them on plus the skins make the chips go crispy so love the skin as they add crunch and flavour!!

I love the graphics on the box the colour purple is fitting with the colour purple of the kumara. I wasn't surprised with the price either, I wish they were less of course as all yummy food is always expensive but the price is fitting as kumara usually isn't cheap if you want a quality vegetable that tastes great!! and this product just blows my mind they are just that good.

Great to have on hand in the freezer and serve up as a treat or in my case more often than I should really! But I am a huge kumara fan and they are just too quick and easy to prepare. A must have so if you haven't tried them put them on your next shopping list and keep an eye out for when they are available.

Yummo i love kumara and consequently kumara chips! I've tried all the brands out there and as far as the frozen ones go these are by far the best brand you can buy! They have their skins left on, which i have to admit to start with i was a bit unsure of (i normally cook kumara with the skin off) but if anything it only added to the taste, how crispy they were and made them seem all the more healthy (And lets face it when you slap together a quick meal if it seems at least a little bit healthy that's a bonus!)

Definitely match these with some sour cream, sweet chili (if your a fan) and a decent steak! I even managed to convince my fiancee that he does indeed like kumara chips with these!! :)

I am not a big fan of kumara chips done in either the oven or a deepfrier so I was a bit unsure how I was going to deal with these when a friend brought them around as her contribution towards a group dinner. Since we had some herbed meatballs in the freezer, I decided to do a casserole.
I chopped the frozen chips into small pieces about 2cm long and threw them into the casserole dish along with onions, peas, corn and beans, plus a couple of cans of chopped tomatos, plus a packet of Maggie Italian Mince Cook-in-the-Pot. With occasional stirs and about 2 hours of gentle cooking, it was ready.
Served on a bed of freshly cooked spiral pasta, this was a tasty and easy meal. The kumara chips had cooked to a firm, but tender consistancy and were a really good addition to the casserole. Much better than the diced potato I would normally have used.
An excellent product.

Boy I love these kumara chips, they are perfect as a side dish to some nice pan fried fish or even a lightly grilled steak (well pretty much anything really).

I found that having the skin left on these made them just the right kind of crispy when cooked, and I can easily see a plate of these sitting on a table in a cafe/bar with a small pot of sour cream in the middle, and I also can see that they wouldn't last long at all (especially if i'm around

Good on ya Kauri Coast Kumara

These chips are easy to prepare and take almost no time to cook. A great idea when you have the munchies and can't be bothered or if you have unexpected guests. A selection of dipping sauces and some good company and you have yourself set.

The price for me was a little high, but they would be a welcome addition to my freezer.

Not usually a fan of Kumara chips, after a disasterous encounter at a local pub where I was presented with a bowl of what appeared to be deep-fried garden worms, with sweet chilli dipping sauce. However, as they say, if you want it done right you should do it yourself, and I finally had a chance to...

After following the instructions on the box, I found the chips to still be a bit limp, so wound the over up another 20 degrees and gave them a few more minutes... they crisped up nicely and the smell was beyond delictable, I felt like one of Pavlov's dogs, I was drooling so much.

Decant them onto paper towels to absorb the thin film of oil used to prevent sticking to the oven tray, then onto a huge plate with a set of small bowls with a variety of dipping sauces; tartare, sweet chilli, ranch, garlic mayo and a personal concoction similar to mustard pickle. de-lish-ee-mo!

The flavour is astounding, with the full flavour of the kumara coming through, a nice crisp bite that breaks through into a soft, creamy sweet flesh. The dipping sauces simply gave a range of flavours to compliment the natural tang of the kumara.

Overall, though you need to pay close attention to them during cooking, as they can burn quite suddenly if you aren't observant, the results are worth the effort. Great as a party snack, or as a side-dish, a serving of these gives you one of your "5+ a day" of healthy eating, and can hardly be scorned if you like kumara at all. One of the best kumara chips I have ever eaten.

Served these up with sweet thai chilli sauce and a dollop of sour cream. They were delicious! I almost always have kumara with the skin left on, so this wasn't a big deal for me... was nice to see a manufacturer thinking about health

They were easy to cook, and even easier to eat... big thumbs up!

Deliciously tangy blend of mangos and ginger... just enough to get your taste buds dancing.