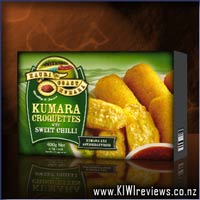 The Kauri Coast Kumara Croquette with sweet chilli is made from the Tokatoka gold variety of Kumara. This variety has a smooth texture creating a soft creamy croquette.

Hmmmmmmm, Kumara..... I have loved Kumara ever since I was a little child, and when I heard about these offerings from Kauri Coast Kumara I all but screamed hell yes i'll try them.

Was I dissapointed in these? Hell no, they are a delectable snack and go well with just about anything you can think of. While some may not like the sweet chilli flavouring I thought it just right and I intend to buy more of these to stock up the freezer.

I was slightly disappointed with these myself . The sweet chilli was almost missed except for a very slight tingle on my lips. I had these in my oven for longer than the time on the box, hoping that maybe they might crisp up, but all it seemed to do was make them feel soggier.

Not really my cup-o-tea, I'm afraid, so I will not be in a rush to go looking for them.

I actually found these to be a little too creamy for my tastes, I had three and was a little over the taste by the third. I also struggled to taste the chilli, but like spicy food, so...
Otherwise, can see these as being a lovely addition to the freezer... especially for unexpected company.

Rarely can anyone convince me to willingly eat kumara. Once had a bad experience with them as a kid, and been resistant to their charms since then. However, slowly, I have been known to throw a half a tuber into the pot when I make my semi-famous cheesy mash, just to give it a lift without having to add salt or too much butter.

But, feeling in the mood for something different, I added these to the trolley, and took them home for a test-run... After cooking up a casserole the previous night, I thought I could make good use of the oven to not only cook these, but also reheat the casserole... nothing worse than nuked meat, it's never as tender.

Preheat the oven, put the casserole in for half an hour, and then the croquettes... 5 minutes and a few turns with tongs later, and I was able to assemble a delightfully tasty meal in no time at all. A good serving of hearty, meaty casserole, a couple of these croquettes and a portion of garlic carrots... delisho.

Overall, these could well be a staple resident of my freezer, as they are so quick and easy to prepare, and can bulk a meal for two out to include a sudden third diner. The only worry I have with them is that I could not detect any evidence of sweet chilli. The croquettes were the rich creamy sweetness of kumara, but no bite of detectable chilli, and there was no separate sachet or container of sauce in the box... however, after many years of spicy eating, my abused tastebuds may not be as nimble as once they were, and consumers with a greater sensitivity may find the flavour where I could not.