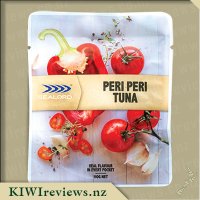 Disclosure StatementFULL DISCLOSURE: A number of units of this product have, at some time, been supplied to KIWIreviews by Sealord or their agents for the purposes of unbiased, independent reviews. No fee was accepted by KIWIreviews or the reviewers themselves - these are genuine, unpaid consumer reviews.
Available:
at selected quality supermarkets

What makes our tuna pockets taste so good? It's the fusion of real ingredients. So you get to enjoy the aromatic blend of herbs, spices, Tuna and chilli. All gently slow cooked to lock in the flavour. Ever since my first encounter with Peri Peri - as a sauce for roast chicken - I have been a real fan of it. That spicy heat, piquancy, or pungency - call it what you will - grabbed my taste buds and whispered gently "You'll never stop craving me now." I was so hoping to find that in this packet, and I am overjoyed to say that I did.

Opening the pack I could smell the chilli, and it had me drooling. I couldn't wait, and put my plans to make something fancy on hold. Instead, I spread half the pouch on top of a piece of buttered fresh wholemeal toast, topped it with a couple of curls of a hard tasty cheddar I had on hand, and tucked in. The flavour was everything I wanted, though I personally could have handled a bit more spicy kick to it. I could easily taste the tuna underneath the chilli, and there was a mild herbiness to it, but to be honest I wasn't too fussed about that. It was so good, I repeated it and that was my review pouch gone. Eeep!

The next day, still wanting to experiment a bit, I popped out to the supermarket and bought a handful more packs. When I got home, I thought about it for a bit, and decided to see how well it would go warmed up and popped on top of some rice. Visually, I can't say it was 'beautiful food' but taste-wise it was a winner for me. The rice bulked up the tuna into a filling meal, and the tuna gave the rice all the flavour it needed to be palatable.

A couple of days later I decided to try using the tuna in some mini rice-paper rolls... when the rolls would behave themselves and stay rolled up, they were very tasty and the chilli gave them more than enough flavour that I didn't feel the need to use a dipping sauce at all.

Overall, this is my top-pick for tuna now, and if the price was a little more in line with how much you get - more in line with canned varieties - I think I would have this on my weekly shopping list as a staple in the pantry, the way I do with the 85g canned varieties. The other factor that sways me towards the canned products is that the cans are reusable (if you are a creative sort of person) or at the very least recyclable. The pouches, devoid of any recycling marks, get turfed on to the curbside by the trash collectors so end up in the landfill instead. Not a huge fan of that, myself.

Having tried Peri Peri style foods before, I had a rough idea of what to expect with this Tuna, although I wasn't sure exactly how spicy this dish was going to be. I think that the level of spice in this tuna mix was actually quite moderate, it was at a low enough level as to not be mouth-melting, but not so low as to hardly worth the name, it is always a good sign when a dish falls into this nice balance.

The Tuna was visually appealing, I was quite eager to dive right into eating this, but I am not one for eating Tuna on it's own, so I tried something else. I spread this mix on some bread and added some Aioli and a couple slices of cheese to make a sandwich, and it turned out really well! This stuff went well cold, but I didn't end up trying it warmed up. However, this does mean that this is a meat that is safe to eat cold, but as the packet says, don't eat it after 3 days of being open, and be sure to pop it in the fridge after you do open it, preferably even before you open it just to be safe.

I think that this mix would do well at parties or special events as just a little something to pop on the table, perhaps mix it up with some onion and Aioli/Mayonnaise to make a dip/spread, I'm sure it will appeal to many people. The taste of this Tuna was quite authentic, the various spices that were added in really enhanced the taste of the Tuna greatly, and the actually spiciness of this product just added that little "kick" we all know and love, and it did this stuff huge favours.

Overall, I would say that this isn't as good as the Lemon, Ginger and Sesame mix I first tried, but it certainly made a good impression on me. The quantity of the mix in the packet was a bit dismal, but it was sufficient enough to make about 3 or 4 sandwiches, and at the price of only $2.60, I think that it has a very good value-to-price ratio. The quality of the Tuna was quite impressive, it was well prepared, it wasn't dry nor was it too oily, I really was quite impressed. Well, That's all I have to say about this, but I would highly recommend it as a good little "ingredient" to add into any tuna meals, I don't think you will be disappointed if you tried it!

Scoffing this tasty mix of chicken, red capsicum and mushrooms in a spicy coconut cream sauce is like taking a ten minute tropical holiday.