« The Secrets of Freemasonry - revealing the suppressed tradition review 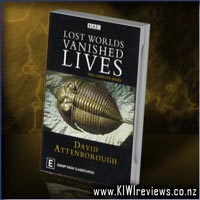 Disclosure StatementFULL DISCLOSURE: A number of units of this product have, at some time, been supplied to KIWIreviews by Roadshow (NZ) Ltd or their agents for the purposes of unbiased, independent reviews. No fee was accepted by KIWIreviews or the reviewers themselves - these are genuine, unpaid consumer reviews.
Available:
July 2006

Could a pterodactyl as large as light aircraft have flown? Did millipedes once grow to six feet long? How did insects become preserved in amber for over 50 million years?

All these questions and more are answered through the study of fossils. In his journeys to the most famous fossil sites in the world, David Attenborough discovers a pre-historic world teeming with life and full of enticing clues as to how life evolved. They reveal how dinosaurs hunted, lived in groups and cared for their young and offers glimpses of the most bizarre creatures that ever lived, like tiny horses and an animal that is half bird and half reptile.

With the help of expert palaeontologists, fossil enthusiasts from around the world, sophisticicated modelling and computer-generated images. Lost Worlds, Vanished Lives breathes life into the Earth's distant past.

I've been a fan of Sir David Attenborough for as long as I can remember - well, ever since seeing his Life on Earth series sometime in the 1970s. Attenborough and the BBC have since that time filmed some utterly magical series: The Blue Planet and The Private Life of Plants are just two that spring to mind; and now the release of this, Lost Worlds Vanished Lives adds another invaluable series to the expanding collection of Attenborough/BBC releases.

First filmed and shown over 15 years ago, the series is as magical today as it was when it was filmed. It was even shown as part of my Geology coursework. Anyone who has collected fossils (as I have and still do, and have passed on to my daughter) will relate instantly to Attenborough's infectious enthusiams for the subject, and even those people who have little interest in fossils cannot fail to be enthralled by the BBC magic that pervades every documentary the BBC ever made.

Naturally, with my childhood interest in fossils carried through to adulthood, something I have enthused enough for my daughter to find the same magic in hunting fossils (which has resulted in us finding dinosaur vertibrae amongst other more common fossils), through to my studies at college - the fascination of fossil hunting, this DVD relives some of the education I received all those years ago.

Attenborough has the knack of being able to inform and educate without ever being condescending. The appeal of this release is not just for the older generation, but children will find enough to fascinate them, and maybe stimulate some to take up this hobby.

If you are a natural history buff, this DVD is for you. I can guarentee that it will never gather dust on your shelves.