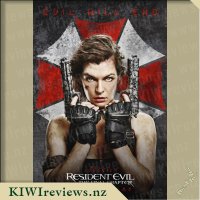 Picking up immediately after the events in Resident Evil: Retribution, Alice (Milla Jovovich) is the only survivor of what was meant to be humanity's final stand against the undead. Now, she must return to where the nightmare began - The Hive in Raccoon City, where the Umbrella Corporation is gathering its forces for a final strike against the only remaining survivors of the apocalypse. As the name implies, this sixth film is the final installment of the franchise. By this point I think most fans are watching the films for the sake of completionism; The original film was brilliant, but began their decay soon afterwards, entering a steep decline in quality storylines after the third installment 'Extinction'. But hope still remained that for the final piece, we would receive some consistency and cohesiveness. No such luck.

Apparently the fifth installment was so engaging, that I completely forgot that it existed, so I was initially a little bit confused at the location and characters present in the opening scenes of this latest film (this is despite the 10 minute recap and narration that I had to sit through, as they outlined the entire franchise again. "Previously on Resident Evil..."). One of the consistent grievances with movies, is the overpowered nature of the main character Alice, and the enemies. The normal T-virus zombies and other survivors have pretty much have no role in the film apart from adding gore as we try to find more creative ways to get them all killed. Nothing changes here, apart from the entire scenario being accelerated to try and fight several big boss fights in.

The entire movie has been stripped of suspense and tension, and instead opts to purely work with shock and confusion. Rather than the absence, and subtle hints of a presence, everything is immediately revealed with an excessively loud 'roar' or 'screech'. My big annoyance with the film is the fact that I cannot enjoy any of the fight choreography, as the entire thing is edited in a way that you have multiple angle changes per second, giving the illusion of high speed actions, without being able to actually know what happens. While it is okay to do on occasion, the high number of fight scenes makes it incredibly hard to follow, and eventually it just becomes irritating (perhaps the budget was so low that they had to do that so you couldn't see the poor choreography and special effects?).

There are so many holes in the logic of the plot, that I almost walked out of the cinema multiple times (and watched two people leave and not come back). In fact, that is the reason why I am writing this review straight after the film. To reach as many people as possible early on. The film becomes a slog, with constant battles, the re-use of the cloning plot device, and eventually a predictable and unsatisfying end. There were so many opportunities for the villains to "win", that the film should have been called 'Resident Evil: The series of repetitive coincidental plot devices'. Everything you have seen is regurgitated, you can predict nearly every death, every action, because you have already seen it all before. It attempts to use nostalgia to keep the interest, but it just makes the film stale.

Now it wasn't all bad. I'll give them that much. There were some great reveals about 3/4 of the way through the film, and it answered many questions that I didn't know I had. So it provided a bit of satisfaction; that feeling of things being wrapped up. It was one of the things that I didn't expect, so I genuinely enjoyed that part. How they used it to end the film however, was disappointing and cop-out, in my opinion. But for a moment there, everything made sense and the world was good.

I would unfortunately say it is best to give this one a miss. I could go on with the issues I had with it, but just know that I was thoroughly disappointed with it.

Tortured by her past and haunted by her own mysterious death, Elektra finds herself resurrected. Although her sensei has trained her well in the strict discipline of ninjutsu, he cannot begin to tame her burning rage over the brutal murder of her parents. Elektra's need to ... more...