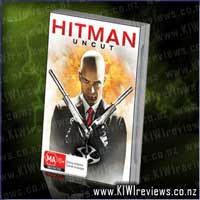 Based on the popular video game.

Agent 47 is the world's deadliest assassin, a hitman with a 100% hit rate. His name derives from a barcode on the back of his head, a serial number that marks his place in a series of experiments designed to create an army of assassins.

The hunter becomes the hunted when he gets caught up in a political takeover. Both Interpol and the Russian military chase the assassin all across eastern Europe as he tries to find out who set him up and why they're trying to take him out of the game.

Wasting little time with a tedious back story Hit-man jumps right into the plot, full of political conspiracies, secret agency machinations, police investigations, and other reasons to have a gunfight in a crowded location. While those unfamiliar with the source material may question Agent 47's origins, it's actually rather commendable (and practical) to forego such set up and just plunge directly into current events with only the accepted knowledge that our anti hero is the most skilled of killers. That being said, the story does convolute itself with excessive setting changes and rehashes of political thrillers mixed with revenge mysteries, but the plot never interferes with that which is most important â" the action.

Several unique scenes of bloodshed find their way into Hit-man, and as expected the body count reaches an impressive sum. While not overloaded with meaningless violence, a few sequences stand out as attaining just the right amount of neat moments. Though Timothy Olyphant is likely not the first actor to enter one's mind on hearing of a Hit-man movie, he accomplishes the surprising feat of impressing upon the audience that he is indeed Agent 47. Plus the sharp black suits with red ties don't hurt. Relative newcomer Olga Kurylenko was also a wise choice, especially to tease the viewer with another staple prominent in the Hit-man games.

Hit-man successfully retains the necessary seriousness inherent in the subject matter and while it rarely covers new ground in the action-adventure genre but is still a fun movie.

This has GOT to be a first in my books... a movie adaptation of a video game that actually works!

Yes, I know, shocking isn't it! After having seen a few other adaptations and realising how tough it is to make a game actually work with a steady plotline, I wasn't really expecting a lot from this, so it was a real highlight to find a movie that easily stood apart as its own entity, and didn't try and pay homage to its game roots by using some corny plot device.

Timothy Olyphant did pretty well in Die Hard 4 but this is where he really impressed me! That icy demeanour, those cold slate eyes, -shudder- Stunning stuff! By far the best attribute was the utter lack of outward emotion during the most violent phases... which really highlighted those few moments throughout where he let a bit of anger slip, and the inner, hidden tenderness of his growing relationship with his second assigned target, Nika, the female lead, played oh-so-deliciously by Olga Kurylenko.

Overall, despite the shameless swiping of footage from the TV series "Dark Angel" for the opening scenes and a few gaffs and continuity errors, the movie really did stand on it's own as an excellent example of what can be done with a violent video game conversion. It's a great movie on the big screen, and it does a pretty good job on the TV too. If you happen to be lucky enough to have a decent home theatre with a quality projector, you will need to stock up on popcorn, because you're going to be very popular most weekend evenings.

Score: 3.3
Product reviews for listing 7715: Ghost in the Shell
Directed by Rupert Sanders