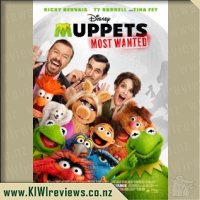 Having loved the previous Muppets movie I felt that this was a must watch, since the kids, my husband and I had all really enjoyed it, my son even winning a copy of the last movie on DVD and it being watched multiple times.

This time around the Muppets end up trying to do a world tour and as they do, various places are robbed and suspicion begins to fall on our band of muppets. What they don't realize (well, one does but is pretty much ignored) is that Kermit has been replaced by an evil frog that looks exactly like Kermit, except for a mole, and Kermit is now in a Russian prison. The intro song "We're filming a sequel" was a lot of fun and really got me into the Muppets vibe, but that was the part of the film I loved the most, the rest, whilst good, just didn't feel like it was 100% true to the Muppets.

The plot was ok but felt a bit convoluted, it felt all a little too over the top, especially as they aren't that stupid yet fall for a very very stupid and transparent lie. The songs were good, but again, following on from the last movie they just weren't as fun as they could have been. I will end up owning this, as I own most of the Muppet movies, but it wasn't as good as I was hoping I would have hoped it would be.

I haven't seen a lot of the Muppets growing up but I obviously know who Kermit the frog is and Miss Piggy.

Who wants to go on a world tour? The muppets go on tour and not one of them realise that Kermit is a bit different from usual or wonder what is up with that, they burst into song without any warning and the fake Kermit kept forgetting this accent. How can they not realise that the reviews are only positive and most people have negative things happen and how can they not get suspicious about where they are performing and why the schedule was not set ages ago.

There were some parts that did make me laugh but about half way through the movie my youngest started swaying in his chair and within minutes he was sleeping on my lap and put my legs to sleep, lucky my laughing did not wake him up.

For some unknown reason I did enjoy watching the prisoners rehearse and get the routine all sorted out. I did enjoy the music and the dancing, the actors did a great job. I .loved how Kermit interrupted the wedding.

I know there are a lot of muppets movies but I'm not in that great of a rush to see them and don't think I would worry about watching this one again. I would however recommend this movie to Muppets lovers or anyone who wants to relax and forget about the stress of life, just don't take the movie too seriously.

We're doing a sequel
That's what we do in Hollywood
And everybody knows the sequel's never quite as good......

That was the lyrics from the opening song and they were right on the money - this sequel really is not that good.

I loved the first movie, it was funny, had a great story, cameos in the right spaces and the right times and it was so original. Then along comes the sequel, it felt like big Hollywood names were just popping up for the sake of it. The story was not that good and there were no laughs.

Kermit and the gang get ready to go on a global tour and hire Dominic Badguy (its French, pronunced Badgeeee) to be their tour manager. It turns out Dominic is the number 2 to the most evil frog out there, Constantine - who just happens to be a dead ringer for Kermit (except for the mole on his upper lip). After pulling a heist Constantine attacks Kermit and sticks the trademark mole on him and pretends to be Kermie. Kermit is thrown into a prison run by Tina Fey and some other big names are the inmates. Things go crazy and no one suspects the truth except for Walter.

This movie does not hold your attention span like the first one did and both of my girls did not have the attention span for it. It is a darker movie and my two year old just kept saying 'don't like this can we go home'. My eldest enjoyed it but does not want to see ever again. Hubby and I both left kinda deflated (me more so cause spent $71 on this movie and was not worth it). In the lift after watching it, I asked another family how they enjoyed it and the mother replied 'kept looking at my watch hoping it would finish soon' - understood that remark as I too was doing that.

Even the Flight of the Concords couldn't save the movie, the songs were so flat. Actually, the worst part was watching Ricky Gervais sing with Constantine and they were doing dancing and you could actually see Rickys lips move as he was trying to tap dance like it was counting the beat. When he was looking at the frog it was like he was looking right through him. None of the people seemed to have that same ability to communicate with the muppets like Jason Segal did. Although it was nice to see Miss Piggy in a wedding dress ready to marry her one true frog - if only..........

Set in the rugged and mysterious Highlands of Scotland, Disney-Pixar's "Brave" follows the heroic journey of Merida (voice of Kelly Macdonald), a skilled archer and headstrong daughter of King Fergus (voice of Billy Connolly) and Queen Elinor (voice of Emma Thompson).

Determined to change her fate, Merida defies an age-old custom sacred to the unruly and uproarious lords of the land: massive Lord MacGuffin (voice of Kevin McKidd), ... more...