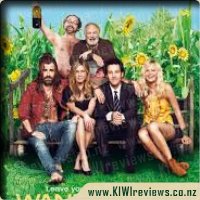 Wanderlust stars Jennifer Aniston as Linda, and Paul Rudd as her husband George. The couple have been living in New York when due to financial reasons they are forced to move in with Georges brother. Whilst on route they are in a car accident and end up spending the night in a commune. After spending some time with his brother, the couple decide to give life on the commune a chance.

The supporting cast seem to provide more and better laughs than our lead characters, George and Linda, which is a shame, but I don't think it hurts the movie too much in that retrospect. This could have been done a lot better, it's a shame as it did have potential.