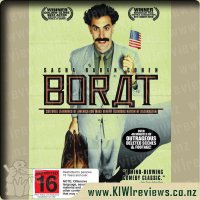 In this hilariously offensive movie, Kazakhstani TV news reporter Borat is dispatched to the United States to make a documentary on the "greatest country in the world." Arriving in New York City with a producer and cameraman in tow, Borat becomes increasingly interested in locating and marrying Pamela Anderson than on his assignment. En route to Los Angeles, he meets real people in real situations with hysterical consequences.

A man with bad english, goes to America intent on marrying Pamela Anderson and film a documentary about America, along the way he manages to offend a lot of people and really leaves you trying to figure out what was scripted and what wasn't.

Half the jokes are rather crude, I mean what isn't when you have two men running through a conference butt naked, wrestling with each other, jokes about Jews, etc. And then of course a lot of the jokes are aimed at Americans and have you really wishing that they are scripted, such as the driver instructor moaning that a women has to give consent for sex and so on.

The first time we watched this we were doubled over with laughter and 'what the heck' moments, they hit hard and they hit fast with no attempt at being subtle. However the more times you watch it the jokes aren't as funny or nab your attention as well. And of course, having grown a bit since we first watched it, some parts are just more offensive than funny now (but I'm sure that was the aim of the movie).

I think a movie like this every now and then isn't a bad thing, but not really good for more than a handful of viewings.

However, concerned about the effects a life of hedonism ... more...