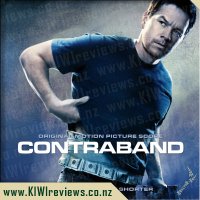 Ex-smuggler Chris Farraday (Mark Wahlberg) gave up his criminal ways long ago. But, he's forced back into the game after his brother-in-law, Andy (Caleb Landry Jones), botches a drug deal for a crime lord (Giovanni Ribisi), leaving Chris to settle the debt. With the help of his best friend (Ben Foster), Chris assembles a team to run to Panama to retrieve a fortune in counterfeit bills. When things go awry, Chris must call on his rusty skills to complete the task before his family pays the price.

I read that this was the film that celebrated Kate Beckinsale's return to action films, so I got this film looking forward to seeing some great female fighting scenes, instead she has taken on the role of the helpless mother-of-two, who has little role in this film, other than being frightened, and threatened. So this film instantly lost points there, a complete waste of a great actress.

The other actors in the film did their jobs well. Giovanni Ribisi, plays one of the only types of roles that he really fits into, the role of the drug man; in this case the "crime lord". I absolutely hated the character of Andy (played by Caleb Landry Jones), who is the most inconsiderate, irritating, and whiny characters I have seen in a while. I disliked his character more than I hated the crime lord who was terrorizing the family of the protagonist.

The actual plot of the film was average. You could very quickly tell where the issues would be, although the solutions were often unpredictable. But I found myself realising that the more interesting parts were the parts occurring in "America"; the terrorising, the customs, the role of Sebastian and the crime lord. Which in turn tells me that the "action" scenes from 'Panama" were dull and lacked excitement. I was lucky that I had this on DVD, because I had to keep replaying parts of the "robbery" as I had zoned out and wasn't paying attention.

This is effectively a slower version of 'Fast & Furious', and it is noticeably slower, with much of the difficult deceptions and disappearances occurring off-camera, so as to hide the realistic improbability of it being able to happen the way the story is told. Unfortunately, it is not a film that I will likely rewatch. I'd much rather watch either of 'The Italian Job' movies, or the 'Fast & Furious' franchise. There are so many better choices.