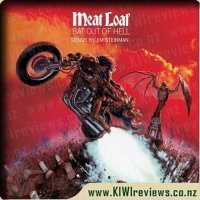 Bat Out of Hell product reviews

Pomp and circumstance of the grandest order for the multi-platinum Meat Loaf and his songwriting mentor, Jim Steinman. The grandiose intro to the title track was indication enough of the tone of the album, with songs stretching out over what at times seemed like musical infinity. Steinman set his songs in evocative wastelands populated by full orchestras and small-town weirdos, 'Paradise By The Dashboard Light' an entire two-handed play in itself, and 'Two Out Of Three Ain't Bad', an overblown symphony of regret and unrequited love. Between them, they pretty much provided the balance of the album. A huge success, only to be repeated by its follow-up in 1993
Track Listing:
1:
1. Bat Out Of Hell
2. You Took The Words Right Out Of My Mouth (Hot Summer Night)
3. Heaven Can Wait
4. All Revved Up With No Place To Go
5. Two Out Of Three Ain't Bad
6. Paradise By The Dashboard Light: Paradise / Let Me Sleep On It / Praying For the End Of Time
7. For Crying Out Loud

This is a CD that I grew up with and so even though I own several of Meat Loaf's CD's, this one will always hold a special place in my heart.

My dad used to have this on cassette tape and would play it in the car all the time, eventually I would beat him to putting it on. We would sing "You Took the Words Right Out of My Mouth" at the top of our lungs, cruising around (usually between school, work and home), singing it as a duet, clapping along to it, this was a fun song. "Two Out of Three Ain't Bad" is the slow song for the CD but is a gorgeous song, though I will admit to thinking he was singing "there ain't no Cruellea De Ville at the bottom of a cracker jack box", Coupe de ville make far more sense, at least I think that's the right lyrics now... :P

Bat Out of Hell is by far the most iconic song on this CD, you just have to enjoy really long songs, if my memory is correct then this is just over ten minutes long, so make sure you've got the time to play it fully, it really is a rock out song. Paradise by the Dashboard Light is also a really fun song, my favourite part is right at the end. There is also (on my CD) a live version of Bat Out of Hell and an acoustic version.

This is where my love affair with Meat Loaf began. Thanks dad. :)