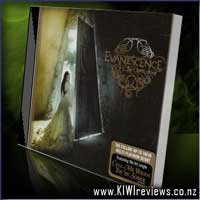 Amy Lee has told media that she lets her experiences in life influence their music, using it as an outlet for negative energy. It is therefore apparent that there has been a lot of negativity since the release of their hit debut album. I was expecting some changes in sound to occur with the departure of Ben Moody, who had attributed guitar and backing vocals, but clearly the departure wasn't amicable as this album becomes much darker.

Losing a lot of the fresh, energy of the debut release, this sophomore studio album, is haunting, slower, and more lethargic. Another source of negativity was apparent in her relationship with Seether's frontman, Shaun Morgan; they had initially done a duet together, but the first single released on this new album, "Call Me When You're Sober", alludes to the break-up.

This is still a great album however, with my all-time favourite evanescence song, "Lithium" being released as the second single from this album. This album focuses much more on Amy Lee's vocals and thus the rest of the music is rather secondary. It is rather unfortunate, I think, as her voice is a beautifully operatic, but needs more of a proper accompaniment than background ambience.

Ever since I heard their first album I have been quite hooked on this band. It was a bit of a shock to find that one of my favourite band members left a little while ago and I was hoping the band hadn't changed too much. I found myself a little disappointed with the slightly different sound this loss caused in the new album. Though many of the songs sounded really good there were a couple of places where it just came across a little flat.
My favourite song would have to be the biggie, "Call Me When You're Sober" because it just rings true about some of the dating tactics I see being used where basically people are so not used to face-to-face dealings that when they do have to, they either come across as totally arrogant and full of b/s, or they have to get drunk to be able to talk to someone they fancy.
The album still has a great "Evanescence" vibe to it, but if anything it has become darker, more brooding and angst'ish. However, if nothing else, I really like the cover artwork, as it makes me think of the books by Laurell K Hamilton that I have started reading recently.

THE WALL tells the story of a man named Pink Floyd who, as a child, lost his father in World War II. Being raised by an overprotective mother, Pink leads a dreary life, finally turning to drugs. As a result of the drugs ... more...