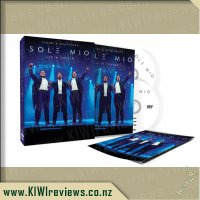 Responding to the thousands of fan requests since their first ever live shows, award-winning Kiwi opera trio Sol3 Mio have released their first live concert DVD. Filmed at Wellington's iconic Michael Fowler Centre in late September 2014, "Ladies And Gentleman... Sol3 Mio Live In Concert" captures all the magic of the group's amazing live show - the emotion, the humour and the wonder of those three incredible voices.

I was given this CD and DVD as a gift (they are bundled in the Deluxe DVD edition), but up to that time I had no idea who the group were - I had heard the name but never had the chance to listen to any of their music. First, the CD was loaded and the volume turned up - and the result was sheer magic. Knowing that the singers were locally based made it even more special as what I was experiencing was a world class performance.

I was impressed by the range of material on the CD. The group appear to be equally comfortable singing in English, Maori, French or Italian, and I found myself singing along with many of the tracks as they are perennial favourites ranging from show tunes, calypso and standards, through to Kiwi favourites like "Te Iwi E". They celebrate their Samoan roots too, including Jerome Grey's "We Are Samoa" on both the CD and the DVD.

After listening to the CD, we sat down to watch the DVD - it was a lot longer and had almost double the number of tracks. Many of the tracks that were DVD-only were more esoteric; five of them were from operas, but although many would not recognise the names of the tracks, they would certainly pick up on the melodies as they are all fairly well-known. They are the sort of tune that you recognise from somewhere but can't quite place.

Also included on the DVD but not the CD are another kiwi classic ("Ten Guitars"), the Frank Sinatra standard "My Way", and a Neapolitan song popular nearly 120 years ago in Italy. This song was revived in 1960 by Elvis Presley with English lyrics and renamed "It's Now Or Never". It has never lost popularity, being recorded by many other artists over the years in both the English version and in the original Italian. This song, "O Sole Mio", is of course the song whose name the group has taken for their own - with a very important variation in the spelling!

Knowing about the link to "O Sole Mio" made the DVD extra special with all of us singing along, some in Italian and others in English. Since the first time I played them, I have almost worn out both CD and DVD and I am totally hooked on the group. What a wonderful advertisement for New Zealand and Samoa both!

Score: 9.6
Product reviews for listing 3620: The Horrifying Truth -  Performed by I Am Giant