ProdID: 882 - The Music of Henry Mancini
Performed by Richard Hayman and His Orchestra 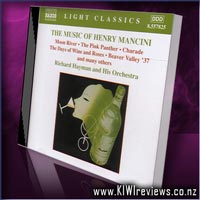 Disclosure StatementFULL DISCLOSURE: A number of units of this product have, at some time, been supplied to KIWIreviews by the company for the purposes of unbiased, independent reviews. No fee was accepted by KIWIreviews or the reviewers themselves - these are genuine, unpaid consumer reviews.
Available:
Feb 2006

Now best remembered among easy-listening fans for the Pink Panther theme, Henry Mancini also wrote innovative background music for such Oscar winners as Breakfast at Tiffany's, Days of Wine and Roses, and Victor/Victoria, while in the sphere of TV he effectively introduced the 'Modern Jazz' score (Peter Gunn). This Album offers orchestral cameos from several of his most admired works in both genres.

Mancini may be largely forgotten by today's youth; however, as I was growing up in the 70s and 80s he was well known only for one composition - The Pink Panther. Who could forget that bouncy "da-dum, da-dum" theme right the way through the cartoons?
Mancini may also be known by a number of people for his famous "Moon River" which is still a popular song today, even if the composer is mostly forgotten. Mancini may only be remembered for his musical skill by die-hard film fans who would know the composer of whatever film they chose to watch.

It is a shame that a man of such musical skills lies unremembered in his grave save for a few peices of music, and Naxos' release of The Music of Henry Mancini goes a long way to redress the balance and expose more people to the compositional skills and musicianship of Henry Mancini and give him the recognition he so richly deserves.

Naxos' release is, as ever, a budget release but the budget release does not mean anything has been skimped on. The quality of the recording is supurb and the notes enclosed with the CD are rich in detail and very informative - the same excellent quality that one can expect with Naxos over and above any other CD within the price range.

The CD opens with Peter Gunn which, by name I would never have known the music but the ears become accustomed to the familiarity of Mancini's well-known compositions - even if they didn't know the name of the piece before. Piece after piece is played, nearly everything familiar to me. To be honest, this wouldn't have been my first choice of CD, but I can see what I would have been missing out had I not had the privilage to listen to Mancini. It is a rare treat and a joy to listen to. Well worth buying.

Performed by the Auckland Philharmonia Orchestra, the orchestral adventure will feature an all new movement from Skyward Sword, a much-anticipated Breath of the Wild arrangement, and the return of a classic that might just make some wishes come true!