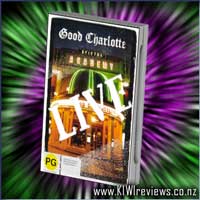 After listening to GC's latest album, The Chronicles of Life and Death, I admit to being impressed at how far they have progressed in less than a year, since Brixton in December 2003.

I admit to being a "less than enthusiastic" fan of recorded or broadcast concerts... concerts are there to be AT, not just watched, after all. It's a whole culture unlike that of everyday life. For one night you are just a piece of the music, barely human, 95% sensory information, 5% meat hardware.

So, keeping that in mind, I enjoyed the concert, the DVD was excellent in editing and execution, there were some good extra bits... but I think I'll stick to the studio-recorded stuff from now on. On recording, a signal loses something, it's a fact of nature... entropy in action. So too a concert or other 'live' event... it's just not the same.

Overall, it will be really handy at parties and other musically-accompanied events, but it's not something I'll put on just for the listen of.

I Am Giant is a rock band from New Zealand, currently based out of London. They formed late in 2008 and released their debut album The Horrifying Truth on 1 August 2011 in Australia and New Zealand, where it has been certified Gold and delivered four Rock Chart No. 1's.[1] The album was released in Asia on 23 March 2012, and in Europe and US on 8 October 2012.