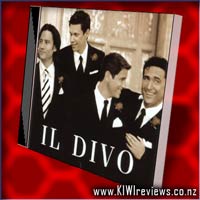 Il Divo are four internationally renowned young male singers with smouldering looks and incredible voices, to take Opera to the mainstream. The band was conceptualized by Simon Cowell (of Idol fame) and is quickly achieving huge levels of international success.

This album debuted at #1 in the UK, stopping Robbie Williams from getting the top spot. It has now over 4 x platinum in sales there and features a variety of popular songs including versions of 'Unbreak My Heart', 'The Man You Love', 'Feelings', 'My Way', 'Mama' and more.

When I first put this recording on at work, the reactions I got were extreme, either extreme dislike or they loved it.

The concept of four tenor voices comes almost a decade after the '3 tenors' made recording history at the football world cup in 1990, and Pavarotti got into the UK charts with Nussun Dorma. This was a spectacle and a format never seen before. It was wondered how it would be done, either all three tenors singing solos, or whether they would collaborate and sing in unison on some tracks. It proved to be a mixture of the the two, and so setting the scene for other opera singers to collaborate. There have been '3 Irish Tenors', '3 sopranos' and more.

Recently in music we have seen the rise of the 'Popera divas' Charlotte Church, New Zealand's own Hayley Westernra and now recently Yulia, which combine the operatic style of singing with non-operatic music. Interest in the operatic form is increasing yet people are staying away from opera, though getting a taste for operatic arias and solos.

It seemed inevitable that divo style male voices would come onto the scene soon enough, and Simon Cowell (Mr Nasty of 'American Idol' fame) had the vision to get four young classically trained opera singers together for a ground-breaking album, combining classically trained voices with contemporary music, hence the re-work of 'My Way' translated into Spanish and presented as 'A mi manera' and Toni Braxton's 'Un-break my heart' sung rather lyrically as 'Regresa a mi'.

For the devout Opera buff, there is little to tempt them to buy the album, for those who positively loath opera, again, there would be little to tempt them either. For those who want an introduction into opera with some well-known songs sung in opera style, then this is for them, however having said that, I do enjoy the album and shall be keeping an eye on Il Divo to see what the future brings for them.

The Punisher is not only going to be one of the biggest movies of the year, it's going be one of the best soundtracks. Based on the Marvel Comics character, who first reared his head in the Spider-Man comic 25 years ago, the Punisher, played by Thomas Jane, is undercover FBI agent Frank Castle.