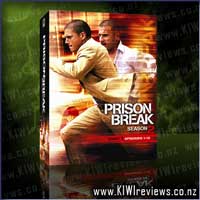 BREAKING OUT WAS JUST THE BEGINNING
Over the wall and on the run, the most-wanted men in America, Michael Scofield (Wentworth Miller) and his brother Lincoln Burrows (Dominic Purcell), must lead a dangerous band of hardened fugitives on a desperate international flights, chasing millions of dollars, risking everything to expose a sinister government conspiracy, and fighting desperately to stay alive until the day they can stop running. Wanted, hunted, betrayed, and double-crossed, the Fox River Eight are out of prison and on the run in the explosive and unpredictable second season of Prison Break, and this time, not everyone makes it out alive!

After seeing the 1st season on TV and absolutely loving it, I had been rather annoyed when due to other commitments, I'd had to miss all but the 1st episode of Season 2. So I was absolutely rapt when I had a shot at watching and reviewing it on DVD. Finally I was able to find out just what had happened to the convicts once they'd escaped. Within minutes of each episode, I was totally hooked into the drama, mind-games, crosses/double crosses, etc. Watching events unfold, and wondering just what piece of the "puzzle" (or escape) Michael was going to uncover next, had me fascinated- I love the way his mind works, the places he hides his clues. But this time, there's a cop as clever as he is, who is quickly learning Scofield's style, and slowly working on being one step ahead of him. If anything, I found this season even more riveting than the first one, and am seriously glad I now own it- it just means I'm going to have to go out and buy the first one as well!! The twists and turns of the plot keep you on the edge of your seat until the very end of each episode, and itching for the next one to find out how the events that were unfolding in the previous one turn out. If you enjoy suspense, mind puzzles, and action, then this is a series you will most likely enjoy- whether or not you've seen Season 1, although it certainly helps if you have.

This double-disc extravaganza is packed with extras, ... more...