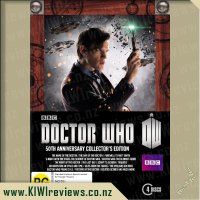 For the ultimate Doctor Who fan comes a special collection of highlights from the ground-breaking 50th anniversary of Doctor Who, including Mark Gatiss award winning drama An Adventure in Space and Time and the hilarious Five-ish Doctors starring Peter Davison, Colin Baker, Sylvester McCoy and a host of special guests.

Limited Edition packaging each with a unique Serial Number on the O-Ring. Special Box packaging with transparent acetate window box so fans can personally select and change the different DVD cover to show through the transparent front window.

Includes:
•  An exclusive cut of the read-through of The Day of the Doctor featuring Matt Smith and David Tennant
•  Deleted scenes
•  New-to-DVD cinema trails
•  A Mark Gatiss' award winning drama about the genesis of Doctor Who; An Adventure in Space and Time.
•  The hilarious Five-ish Doctors - starring Peter Davison, Colin Baker, Sylvester McCoy and a host of special guests - will also be included on a DVD and Blu Ray box for the first time.

This has to be one of the absolute best compilations from the BBC in recent years, not only does it contain the 50th Anniversary Special, it also contains Matt Smith's Final Swan song as the Doctor, not to mention the superbly excellent BBC Drama (although it's more like a Docudrama) An Adventure in Space and Time, a incredibly well written look into how everyone's favourite Time Lord came into being.

Along with the excellent Episodes is also some extraordinary bonus features, like the many other Doctor Who specials that came out during 2013 to mark the 50th Anniversary. And of course the rather excellent 'The Five(ish) Doctors'

If I was asked to pick my absolute favourite episode/extra from this collection it would have to be 'The Day of the Doctor', but that is purely for the inclusion of the incomparable John Hurt (not to mention the archive footage of the rest of the Doctors)

So what are you lot waiting for? Rush out and buy this today.

Summing up 50 years of classic sci-fi is a daunting task indeed, yet through hard work and the dedication of a world-wide fanbase drawn from every walk of life, the team at BBC have managed to bring together all the myriad threads of the Whoniverse and pick out those that are arguably some of the most poignant, influential moments in the History of Who. (Is it just me, or does that sound like a Dr Seuss book title?)

Spread across 4 discs - be they DVD or Blu-Ray - we have everything the Whovian in your life will adore, with all of the more recent specials, all of the 50th Anniversary titles, and quite a lot more, all arrayed for your viewing pleasure and edification. Watching these, I learned so much about the Doctor Whoniverse that I had no idea about, especially the earliest days. As a child, I recall seeing my first Doctor - Patrick Troughton - plying his wits against all sorts of mischief during the later stages of his incarnation, then replaced by Tom Baker. It was an inspirational, mind-expanding series back then, as it still is now, but then it was almost akin to magic because quantum theory and parallel dimensions etc. were just pipe-dreams, not almost-confirmed reality as they are today. Does go to show though, does it not, that yesterday's fantasy is tomorrow's fact.

I can't be convinced to pick any single show as a favourite - I loved them all, even if for differing reasons. For some, it is the historical aspects that appeal to me so much - learning things about the Doctor Who timeline that I hadn't been aware of before, for others it was the stories themselves that drew me in. I will be honest and say that I am quite spoiled and jaded by today's level of special effects, so some of the earlier shows leave me cringing with their costuming and SFX... but for their day, they were cutting edge techniques I will admit. For example, comparing the first versions of the Cybermen against today's versions, you have to wonder how they ever felt the original costumes were in any way realistic... of course, they weren't, but willful suspension of disbelief is a key part of any sci-fi.

I have to add that a most-excellent part of this set is the documentary "A Journey in Space and Time" - Though phrased as a dramatic tale, it carries far too much information and revelation to be anything but a documentary to me. The behind-the-scenes peek at the very earliest days of the Doctor is an invaluable piece of history for any Whovian.

Overall, this has to be a must-have for all Doctor Who fans out there. At this price, it's a remarkable deal too - it's a bit like the TARDIS really, there's just so much more inside this box than you would have thought possible, maybe not in hours watched, but certainly in information learned and entertainment given.