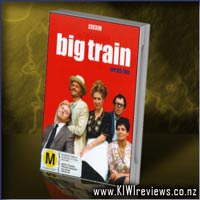 Disclosure StatementFULL DISCLOSURE: A number of units of this product have, at some time, been supplied to KIWIreviews by the company for the purposes of unbiased, independent reviews. No fee was accepted by KIWIreviews or the reviewers themselves - these are genuine, unpaid consumer reviews.
Available:
April 2006

Big Train was the eagerly awaited follow-up to Father Ted from writers Graham Linehan and Arthur Matthews, and is a sketch show in the tradition of Monty Python.

Big Train steams out of the comedy tunnel as realism meets utter stupidity in a cavalcade of daft sketches performed by high-quality actors in a series of stunning costumes and vast sets reminiscent of the worst excesses of DW Griffith.

Along the way we meet shy policemen, pop stars chasing jockeys, a duck in danger, hens in armed combat, a confused Transport Minister, highly charged sexual politics and casual, though necessary, violence. The show thrives on the subversion of everyday occurrences, mundane situations and famous faces.

Includes all six episodes from Series 2, and special features such as Cast & Crew Commentary, deleted scenes, biographies, photo gallery and 7 minutes of material from "Geht's Noch" , the German version of Big Train.

There are many 'comedies' around - unfortunately most of them are American, and usually so dreadful that even my daughter asks 'Why do they think that is funny?' Clearly American humour is dumbed down so far that intelligent kids can see through it immediately. The canned laughter fools no-one with an ounce of noggin. Surely American comedy is just some form of mind control to keep the masses under control by turning their citizens into non-thinking entities.

English humour, on the other hand, does require a brain to see the humour in the irreverent juxtapositions of daily life with a healthy dose of the obscura. Plate spinning surgeons perhaps? French speaking tortoises? Flamenco-dancing bomb-disposal squads? Drown the Sumatran tiger campaign, and my favourite - the Cake Factory!

This is very much in the vein of Monty Python, who were clearly the grandfathers of all English comedy since, but this takes the surreal humour to the next level, well, more than the next level actually - an elevator is needed to get to that level. These people are clearly destined for greatness and to be talked about in 30 years' time with the same reverence that Monty Python receives now. These people are the trailblazers into the future of comedy.

Each episode was filled with short skits from the irreverent, the surreal and just the plain quirky 'WTF???' It never failed to amuse me - I say 'amuse' with my typical English understatement, when what I really meant to say was 'I was laughing so hard that my belly burst and I needed to call a surgeon to reunite me with my spilled entrails, then laughed so much more that I split my stitches as well as my sides' - Yes, it was quite droll.

It is a damned shame I missed the first series, and I can see I will have to scour shops throughout the country to aquire by fair means or foul, that mythical 'series one'. I can see this DVD will be brought out on regular occasions, and not just on drunken evenings.

Back in their day, Monty Python were the trendsetters in alternative British comedy, with such classics as The Parrot Sketch, The Ministry of Silly Walks, and of course who could forget The Bruces, with their wonderful The Philosophers Song... with the highly popular spin-off movies they did as a team, and their distinctive flavours showing up in their non-Python movies, such as Terry Gilliam's Brazil, and of course Erik the Viking... they were the undisputed leaders of their genre, even today.

Today, we are mired down in short-attention-span, too-obvious-punchlined American wit, and let's face it... you don't need to have an IQ higher than your shoe size to get the joke of such attempts at humour. We British colonial decendants appreciate a higher form of wit, where a single skit may in fact be funny on a number of different levels, and for a number of different reasons. In fact, the more jokes layered upon each other, the better the laugh!

So today, we look towards the modern generation of humourists and satirists to entertain us, and that's where Big Train comes in. Blazing a new trail through the dross of so-called comedy, where an overweight, aggressive woman yelling at her family is called humour, where a sad-sack of an African-American man droning on about his deprived childhood is thought of as hilarious... Big Train light up the sky with skits and scenes of humour that derive their roots from the Python era, with a hint of Kenny Everett, Benny Hill... and dare I say it, even a dash of "Not the Nine O'clock News."

Some of the skits are just a tad TOO outside the bounds though, so don't be surprised if your main source of laughter is watching the blank looks of utter confusion slowly creeping over the faces of those around you, as they try to figure out the punchline... and just don't. The majority of the skits can be reduced down to a simple formula... take something totally predictable, and put such a mighty twist in it's tail that that the juxaposition is just outrageous, and that irony makes it funny. And since the ingredients differ, they don't come across as 'variations on a theme', but rather as a selection of variety, all as easy to laugh at as each other.

6 episodes, each with around 20 scenes, running to about 30 minutes per episode... there's over 3 hours of hilarity, head scratching, laughing until your lungs hurt, and maybe the odd emergency dash to the loo to avoid wet trousers... they all add up to great comedy that is sure to become a British Classic in the years to come, and thus join the hallowed ranks of the Mighty Bellyshakers such as those I have mentioned earlier.

Overall, hilarious. I was laughing from the opening credits (which are a very good graphic representation of their style of humour... You'll understand when you see them.) through to the end. So much so in fact, that I plan to share this with all my friends and family, and encourage them to go out and buy a copy for themselves. As well as that, I hope to find Series 1 on DVD somewhere and snaffle it up, to sit alongside this DVD on my "Has Serious Merit" shelf. Well done, to our new generation of joviality-bearers.

Someone say drugs, pedos & terrorists? Probably not. These are just some of the topical/fun themes touched upon in this one-hour honesty session. Alex's twisted outlook will shake your faith in humanity before restoring it ever so slightly, then smashing it once again beyond repair. But hey, at least it's entertaining.