« The Wind in the Willows - Autumn Antics review 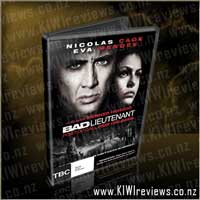 From legendary German director Werner Herzog, Bad Lieutenant: Port of Call - New Orleans was shot on location in the Louisiana city during the summer of 2008. It is based on, but NOT a sequel to NOR a remake of, the film by Abel Ferrara.

Academy Award winner Nicolas Cage stars as Terence McDonagh, a rogue detective who is as devoted to his job as he is at scoring drugs - while playing fast and loose with the law. He wields his badge as often as he wields his gun in order to get his way. In the aftermath of Hurricane Katrina he became a high-functioning drug addict who is a deeply intuitive, fearless detective reigning over the beautiful ruins of New Orleans with authority and abandon.

Complicating his tumultuous life is the prostitute he loves, Frankie Donnenfield (Eva Mendes). Together they descend into their own world marked by desire, compulsion, and conscience. The result is a singular masterpiece of film making: equally sad and maniacally humourous.

Less of a movie, and more of a video diary of how a good, but rough, cop turns into a poster-child for the other side of the thin blue line.

The movie starts with the main character, McDonagh, performing an act of conscience - jumping off a mezzanine walkway into a flooded jail to rescue a trapped prisoner. This act of bravery causes him to injure himself, and thus begins the long road to drug addiction and all the assorted evils that are required to hide the extent of his drug use, and fund the ongoing purchase (and sometimes outright theft) of ever-larger amounts of narcotics to cope with the pain.

At his best, he becomes a high;y-intuitive cop, able to detect crimes with an almost supernatural ability... at his worst, he's little more than a drug-addled pimp with a tarnished badge and a scarred soul. His only redeeming features during the worst phases are his desire to protect the woman he loves (despite her occupation), and his ability to twist situations with the most elegant ease, to save his sorry butt and pin the trouble on the bad guys... all while appearing to be the worst unifrom-wearing scum you could imagine.

Eva Mendes does a stunning job as Frankie, prostitute and love-interest of our anti-hero, despite a sometimes lacklustre patch here and there. Cage plays the morally-ambiguous cop like it was his own alter-ego, utterly believable yet strangely distant, as though he's not quite there... the epitome of a drug addict trying to perform their best while in the throws of their worst. Val Kilmer, clearly starting to show his age, gave a decidedly limp performance, and was easily forgettable. A surprisingly sad offering from a far more accomplished actor than would be assumed from watching this.

Overall, despite not being at all what I would call a movie, and appearing to be far more of a dramatised biography with some utterly surreal cinematography in places (and more than a few fictional reptilian characters appearing at odd times), this was an unusually satisfying, if not all that stunning, portrayal of how one small event can turn the good into the bad. As the saying goes, "No good deem ever goes unpunished for long."