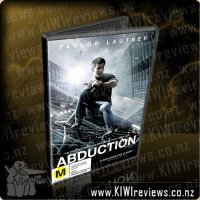 When he stumbles upon an image of himself as a little boy on a missing persons website, all of Nathan's darkest fears come true: he realizes his parents are not his own and his life is a lie, carefully fabricated to hide something more mysterious and dangerous than he could have ever imagined. Just as he begins to piece together his true identity, Nathan is targeted by a team of trained killers, forcing him on the run with the only person he can trust, his neighbor, Karen (Lily Collins).

Every second counts as Nathan and Karen race to evade an army of assassins and federal operatives. But as his opponents close in, Nathan realizes that the only way he'll survive and solve the mystery of his elusive biological father is to stop running and take matters into his own hands.

This is a movie that we grabbed off the shelf because we needed one more DVD to rent to get the deal. My mum had seen it and said that it wasn't as bad as she expected. For me, it delivered everything that I had expected. Some great actors who were all let down by one, single, Taylor Lautner.

Lily Collins I like, I've seen her in a couple of movies and enjoyed them, I just think that this movie was too soon for her to delve into and she should have gotten a couple more years under her belt before taking on a role such as this.

Taylor Lautner, to me, cannot act. I think that he was chosen simply due to his fame in the Twilight series and the hope that it would bring those fans across to this movie and be the money maker. When he needed to show emotion, it felt to me that he was simply trying too hard, and of course, they came up with some excuse to have him shirtless in the movie.

I'm glad that I didn't go and see this when it first came out, and it's not one that I will rent again, but if it is on late at night, and there is nothing else on TV then I will possibly watch it again, that, or just get my arse to bed earlier

John Singleton's ABDUCTION is the type of movie not seen as often nowadays as in the past: the action star vehicle. These films, which seemed to come in an endless supply during the 1980s action star heyday, usually exist for no other reason than to promote their leading man (or occasionally woman) and their often dubious talents. Here, Taylor Lautner steps out of his supporting role in the TWILIGHT franchise and into his first starring role as Nathan, the high schooler on the run from a past he knows nothing about.

As is typical of the star vehicle, Lautner's shortcomings as an actor, not to mention those of dreadful love interest Lily Collins, are minimised by surrounding him with strong supporting players such as Sigourney Weaver, Alfred Molina, and, clearly having a blast as Nathan's 'parents', Maria Bello and Jason Isaacs. The trick works for the most part, with Weaver being the only disappointing exception, as she delivers her lines in such an unconvincing manner, and is clearly only in it for the paycheck.

As colossally stupid as the film is, ABDUCTION moves along at a brisk pace and never feels particularly boring. There's a certain masochistic pleasure in watching Lautner do his best to display any kind of emotion other than broody squinting, and while at times he honestly looks like he has no idea what he is doing, Singleton gives him several opportunities to take his shirt off and show the only real reason that he's a star. Which brings me to maybe the most underwhelming aspect of this entire mess, Singleton himself. How did this filmmaker, the youngest ever to be nominated for a directing Oscar (for BOYZ IN THE HOOD), end up making this kind of throwaway teen trash? With the exception of 2001's excellent but underseen BABY BOY, Singleton seems to have moved further and further away from the initial promise he displayed, and ABDUCTION is without question his lowest point yet. In the right crowd, it is probably a fun film with plenty to poke fun at but, much like its star, is ultimately a vapid and moronic product wrapped in a pretty package.

Lawyer Bryan Stevenson takes on the case of Walter McMillian, who is sentenced to die for murder despite evidence proving his innocence. In the years that follow, Stevenson encounters racism and legal manoeuvrings as he fights for McMillian's life.