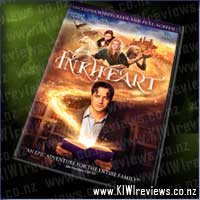 When Mo Folchart reads a story, the characters leap off the page. Literally. And that's a problem. Mo must somehow use his special powers to send the interlopers back to their world, and save ours. If ever a task was easier read than done, this is it. Mo and his daughter Meggi, aided by friends real and fictional, plunge into a thrilling quest that pits them against diabolical villains, fantastic beast and dangers at every turn.

Brendan Fraser leads a splendid cast (including Academy Award winners Helen Mirren and Jim Broadbent) in an all fun, all family film of Cornelia Funke's best seller. Follow Mo and Meggie into adventure more exciting than any ever read. Because it's an adventure they're going to live.

This was a great movie, the idea of a silver tongue who when reads something written down can bring to life a character into our world with the only problem being that one person from our world be transported back into the book. This for me was a great family movie as not many scary scenes for my children.

The action could have been a little more throughout the movie but when there was action it was good. The visual effects were good and the soundtrack was good to listen too as well. Having seen Brendan Fraser in some of his movies, he has always been portrayed in humorous movies and this was not much different. To me he played the role very well and was glad to see his funny side continue.

The mix of different characters from both the human world and even the book worlds from different books played well together, it was also funny to see how even another character from another book could learn dragons breath from our inkheart character as well. Overall I am glad I bought the movie and got to see it with the family, was well worth the buy when I saw it on the shelf even though I had no idea at the time what it was like.

I saw this on the shelf at the DVD store and thought that I would rent it. It looked good enough that my husband and I would enjoy it, and that my son who was 3 at the time would gain some amusement out of it as well. It promptly got added to our DVD collection at home.

The only thing that I did not like about the film was the ending as to me it felt like it fell a bit flat and was a bit rushed, but all in all it was still a very good movie. Yes, it can be predictable, but I find that with 90% of the movies I watch these days. But the acting is superb, and the characters are ones that you are rooting for the whole time. Love the concept and thoroughly enjoyed the film.

I had no idea what to expect when I hired this movie, except that generally I like films with Brendan Fraser and even more generally, I tend to like fantasy. This was the story of a guy who, whenever he read a book aloud, would cause something from that world to materialize in ours. Only catch is, something from our world gets sent into the fictional world in return.

I enjoyed the concept and found the overall story enjoyable, if a little predictable. I could sense that it was sort of glossing over parts which probably had a lot more depth and intrigue in the book. Still, I loved the young thief boy, Farid, and I thought that Andy Serkis' evil villain character was amusing.

All in all, a good family film which has me eager to read the books and find out what I've missed.