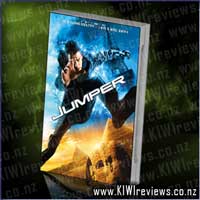 Samuel L. Jackson is quite a typecast actor. The movies that he excels in are those that involve him in a position of authority; trying to stop people from doing something, or ordering people around.

As one would expect to happen, eventually the power gets used for the wrong reasons, and the Jumper effectively becomes a security risk. Similarly to what is seen in movies that include advanced species and powers, the typical response is to acquire it, capture it, or kill it. And so ensues a game of 'catch me if you can' between the Jumper, and the Paladin tasked with his capture.

Visually, there were a lot of amazing environments, which would be expected in a movie that incorporates teleportation. And I enjoyed the limitations that were placed on the power, as it made it "more believable". I was honestly hoping for bigger battles, but it sufficed. An enjoyable movie, and one that would start a conversation at a gathering of friends, but wouldn't be on repeat.

If you had the power to relocate to anywhere in the blink of an eye, just by thinking about it... where would you go, and what would you do there?

Would you leap into disaster zones and save innocent lives, or would you pop into your nearest bank and empty the vault at 2am? Slowly replace all the gold bars in Fort Knox with painted bricks, just to see how long it would take them to notice, or haul trapped coal miners out of the dark depths of death? Would you travel light, or live in luxury?

We would all have a different answer, I bet... but this character lives his life for the pleasure... all the latest toys, because he can take what he wants, or take the money to buy them. Walls covered in holiday snaps that serve as triggers to open a wormhole and pop through to someplace that isn't boring for now... and if it does get dull, well, there's a whole world out there waiting... Makes me wonder... if he was wrapped up in a spacesuit and given a picture of the surface of the moon, or Io, or Saturn's rings... could he get there too?

Once again we get the pleasure of seeing Samuel L Jackson and Hayden Christensen working together, and again we see Sam is chasing after Hayden looking to give him a good spanking for misbehaving... I tell ya, Hollywood is getting awfully small in the lofty reaches of fame'dom... and once again, they really pull it off, showing us why they earn the big bucks and the heavy kudos. Their characters are fully believable (if you suspend your disbelief on the whole teleporting premise) and you get to see all that grit that made Samuel a hit in "Pulp Fiction" and the Star Wars movies.

Overall, though there is a lot of potential in the plot, it's quite thin and weak in places, and doesn't really follow through on some potentially exciting opportunities... but then, this movie was originally designed as part one of a trilogy... so I guess we'll have to see if it does well enough to prompt the studios to work on #2. Fingers crossed that if they do, they don't ignore the really fun side-roads quite as much...