« The Kingkiller Chronicle : Day One : The Name of the Wind review 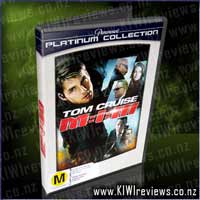 The stakes have never been higher. The action has never been hotter. This is Mission Impossible like you've never seen it before...

Tom Cruise stars as Ethan Hunt in this pulse-pounding thrill ride. Lured back into action by his agency superiors, Ethan faces his deadliest adversary yet - a sadistic weapons dealer named Owen Davian. With the support of his IMF team, Ethan leaps into spectacular adventure from Rome to Shanghai as he races to rescue a captured agent and stop Davian from eliminating his next target: Ethan's wife Julia.

Though I was always a fan of the original TV series, I never really found the modern movie remakes to be as appealing or enthralling... too much hype and not enough story... but then again, back in the old days the idea of some of the gimmicks was pretty high tech and 'beyond imagining' whereas today it is simplicity itself to scan a document and change the writing, or jump onto a computer and find almost any information you need by legal, or other, means. Kinda steals a bit of that magic away, so they have to replace it with guns, bombs, funky voice-changers built into stickers, and super-nasty biological weapons, etc.

This movie was, of the three, the least annoying and lame, for me. With some truely dastardly characters, and some amazing fight scenes, a plot that held itself together enough to let you enjoy the flow, and the usual 'atmospheric' soundtrack, it was actually a pleasure to watch.

Overall, not too bad a movie if you can't find anything that really grabs ya. It's something worthy of a beer and a bowl of popcorn after a game of poker with the lads.

Born with a gift he didn't want, the ability to clearly recognize the half-breed angels and demons that walk the earth in human skin, Constantine was driven to take his own life to escape the tormenting clarity of his vision. But he failed. Resuscitated against his will, he found himself cast back into the land of the living. Now, marked as an attempted suicide with a temporary lease on ... more...