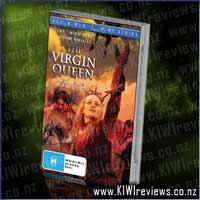 Vulnerable and imperious, passionate and unreachable, from teenage princess to accomplished queen, forever torn between duty and personla longing. The reigh of Elizabeth I is exposed in lavish and spectacular style. Amidst an atmosphere of plotting and intrigue, torture and murder, Elizabeth reigned alone for more than 40 years.

This captivating drama sees the beguiling queen defend her throne and lead troops into battle against the Spanaish Armada. Zealous and loving, her duty as monarch always took precedence over her emotions. The Virgin Queen delivers the fears and loathings, loves and pleasures of television's favourite monarch.

The Virgin Queen mini series tells us of the life of Queen Elizabeth I. It begins by showing us how she was a victim of Queen Mary's reign of terror, through to her love affair with fellow royal childhood friend Robert Dudley. Following this the movie focuses on her triumph of the Armada, and of course it portrays her final years and her relationship with her protege, The Earl of Essex.

I found this mini series to be a great portrayal of Queen Elizabeth I, however I must admit I felt that at times Anne-Marie Duff, who played Queen Elizabeth, was quite forced in her character, almost as if she was out of her depth in this role.

I thought the costumes were absolutely stunning and very accurate of the attire of that era. However in saying that I felt the hair and make up looked quite odd. Her wig was great, but how it was positioned on her head, showed more head than hair. Yes there was lots of hair but it went upwards, not around the head. The nape of her neck was bare, and she showed lots of forehead. I felt this took the line of vision away from the head. I zoomed in on the skin rather than the character itself. When Queen Elizabeth finally aged, she looked very ugly. I don't know if she was actually an ugly lady or not, but I felt the older Queen Elizabeth looked fake, especially with the added veins that were put on her neck.

The classification on this film is rated M as it has violence. Since you don't actually see anyone getting killed I felt this lacked realism.

I feel the mini series dragged on a bit. At 198mins (3hrs 18mins) long you need to be in the right head space, be uninterrupted and to like historical/periodical movies to enjoy it.

Joanne Whalley played her part as Queen Mary tremendously. She was very believeable, and it was a sad but joyous moment for Queen Elizabeth when she died. Everyone thought she was having a baby, however it turned out to be a tumour.

I can't say that I thought Tom Hardy (Robert Dudley) was the studmuffin I'd heard about, but in saying that I didn't think any of the leading characters were picked for their great looks. I guess people really weren't as beautiful back in the 16th Century as we are today. We have too much technology out now to help us in that area :)