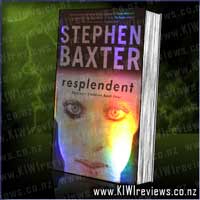 Disclosure StatementFULL DISCLOSURE: A number of units of this product have, at some time, been supplied to KIWIreviews by Hachette or their agents for the purposes of unbiased, independent reviews. No fee was accepted by KIWIreviews or the reviewers themselves - these are genuine, unpaid consumer reviews.
Available:
At all good book stores

From the last days of the Roman Empire to the first days of the Transcendence, half a million years later, Destiny's Children has told the epic, terrifying story of how mankind has grown, how it has evolved, how it has forgotten its origins, reached its peak as a galaxy-spanning culture and, finally, hit the tipping point before its last, final fall.

Resplendent is a collection of connected stories that inform and expand the three novels of Destiny's Children. Vast in scope and ambition, full of wonder, this is classic Baxter, classic S.F.

To call this a 'conclusion' to the Destiny's Children saga would be a mistake... this is more like literary polyfilla, designed to fill in the gaps in the story of mankind's potential evolution and expansion into the vast distances between the stars.

Many of the stories are connected well, being all in the same 'gap' between tales first presented to us in the first three books, but throughout this book there are large gaps in time, some where the original stories fitted in, and a couple where the individual tales stretch over such distances in time as to make any stories inbetween simply pointless. There is even one epic tale that covers an almost 25,000 year span, so naturally there is a bit of overlap there as well.

Overall, if you found the first three books good reading, or just love classic Baxter style, then you should have this one on your bookshelf too... it's a good book to read if you only get short patches of time through out the day or week, since it is bordering on being an anthology tied together with some narration by one of the early key characters, and in fact with many of the stories having been published as stand-alone versions in years past, I would actually classify it as such myself. Great when you only get your lunchbreaks to dive into the future.